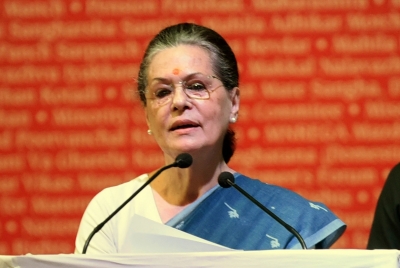 New Delhi: Pushing forward the Bharat Jodo Yatra, Congress president Sonia Gandhi has decided to join the march on October 6 in Karnataka, according to PTI.

The Yatra will pass through Karnataka for 21 days covering 511 km in the state. It began on September 7 from Kanyakumari and entered Karnataka on Friday after passing through Tamil Nadu and Kerala. Sonia Gandhi will walk with the participants on October 6 during the Karnataka leg of the Yatra, a party source said.

It is said that the Congress president’s move will give a fresh impetus to the ongoing march to bring peace in the country. Several Congress leaders and workers welcomed her move after hearing the news. This would be the first time that she will participate in the Yatra which began when she was abroad for a medical check-up.

Rahul Gandhi has been walking continuously in the Yatra and reached Gundlupet in Karnataka on September 30 from Gudalur in neighbouring Tamil Nadu. The Yatra has entered a crucial phase with the Karnataka leg as the state goes to polls next year and is the first time when it is passing through a BJP-ruled state, reported PTI.

Meanwhile, Rahul Gandhi today said that his Bharat Jodo Yatra is a battle with the ideology which killed Mahatma Gandhi. He took part in the Gandhi Jayanthi celebration at the Khadi Gramodyog Centre in Badanavalu Mysuru district. He said that the hard-won freedoms of the people of the country eroded in the last eight years under the BJP rule.

“Just as Gandhiji fought the British Raj, we are today fighting a battle with the very ideology that killed Gandhi. This ideology has in the past eight years delivered inequality, divisiveness and the erosion of our hard-won freedoms,” the Congress leader said, according to Indian Express.

He also paid tributes to the former Prime Minister, Lal Bahadur Shastri, who gave the slogan ‘Jai Jawan, Jai Kisan’, on his birth anniversary. Jawans and farmers are the backbone of India, Rahul tweeted. “Today, the dictatorial government of the country is continuously attacking them. Like our ancestors, we too are fighting for their rights. I will not allow injustice to be done to them,” tweeted Rahul.