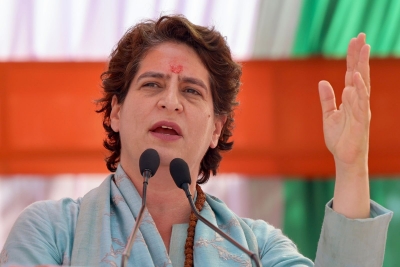 New Delhi, May 24 (IANS) The Congress on Tuesday announced the formation of three committees in the run up to the elections. The Task Force-2024 met at the AICC office and deliberated on the issue. The Political Affairs Group will advise the Congress President on key political issues including appointments.

The political affairs group is likely to function as the parliamentary board or a core group as the dissidents had demanded revival of the parliamentary board to take key party decisions. With Rahul on board, party president Sonia Gandhi has to ensure that advice from him will be given more weightage. Rahul’s key aide K C Venugopal has also been kept in the two committees.

The task force will look after election management till 2024 which means it will be more dependent on Priyanka Gandhi who along with former IPAC member Sunil Kanugolu will be the driving force on election issues while senior members like P Chidambaram and Jairam Ramesh may look after the alliance issues which is the major hurdle within the UPA and the like minded parties. In the absence of Ahmed Patel the Congress lacks an experienced hand to talk to potential allies. In Task Force-2024, Mukul Wasnik, K.C. Venugopal, Ajay Maken and Randeep Singh Surjewala are members.

A statement from the party said, “Each member of the Task Force shall be assigned specific tasks related to organisation, communications and media, outreach, finance and election management. They shall have designated teams which will be notified subsequently. The Task Force will also follow up on the Udaipur ‘Sankalp’ Declaration and the reports of the six groups.”

The Congress has constituted three committees as was decided during its ‘Chintan Shivir’ in Udaipur — political affairs group, Task Force-2024 and a committee for the ‘Bharat Jodo Yatra’.

The Congress statement said, “Following the Udaipur Nav Sankalp Shivir, the Hon’ble Congress President has constituted a Political Affairs Group that will be presided over by her, a Task Force-2024 and a Central Planning Group for the coordination of the Bharat Jodo Yatra.” – IANS

Gyanvapi row: Varanasi court to hear maintainability of civil suit on May 26