Nitish says ‘no’ to minister’s exit over Muzaffarpur horror 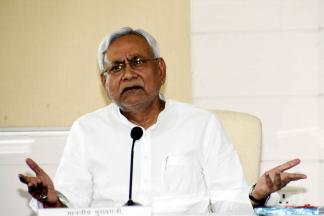 Despite repeated demands for her resignation by the opposition and even by two Bharatiya Janata Party leaders, Nitish Kumar gave a clean chit to Manju Verma.

“She (Manju Verma) has denied her involvement in the case. A CBI probe is underway. Anyone found guilty, even the Ministers, will be sent to jail. No one will be spared,” Nitish Kumar said.

Opposition leaders have alleged that Manju Verma was aware of her husband’s frequent visits to the Muzaffarpur shelter home where 34 minor girls were raped.

Expressing his anguish on the matter, Nitish Kumar called the incident “shameful and painful” and said that from now no NGO would be allowed to run shelter homes in Bihar. Only the government would have that authority.

He said that the the High Court should monitor the CBI investigation.

The Muzaffarpur case came to light when the Bihar Social Welfare Department filed an FIR based on a social audit of the shelter home conducted by the Tata Institute of Social Sciences, Mumbai.
(IANS)