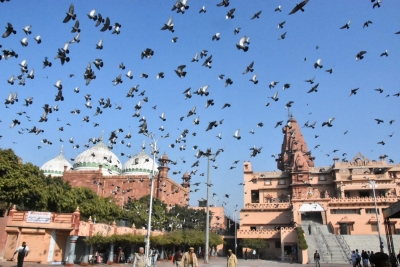 Mathura: A Mathura district court on Saturday, ordered the survey of the Shahi Idgah mosque, which is said to be built on the birthplace of Lord Krishna, by the Archaeological Survey of India from January 2.

The court passed the order on a lawsuit filed by Vishnu Gupta of the Hindu Sena.

The report will be submitted on January 20.

The lawsuit is one of the many by Hindu outfits demanding the removal of the 17th century Shahi Idgah Masjid from the Katra Keshav Dev temple, claiming that the mosque has been built on the birthplace of Lord Krishna.

The Shahi Idgah mosque was reportedly built on Krishna Janmabhoomi on the orders of Mughal emperor Aurangzeb in 1669-70.

The civil court in Mathura had earlier dismissed the case saying it cannot be admitted under the Places of Worship Act of 1991, which maintains the religious status of any place of worship as it was on August 15, 1947.

The only exception to the law was the Ayodhya temple-mosque case involving the 16th century Babri mosque, razed in 1992 by Hindu activists who believed it was built on the ruins of an ancient temple.

The Supreme Court in 2019 handed over the mosque site to Hindus for a grand Ram temple and ordered alternative land for a mosque.

The petitioners argued in their suit that as devotees of Lord Krishna, they have a right to approach the court. They say they have the right to worship at the actual birthplace of Krishna.

The Akhil Bharat Hindu Mahasabha had earlier this month given a call for reciting Hanuman Chalisa inside the Shahi Masjid Idgah to mark the anniversary of the Babri Mosque demolition. One of the outfit’s leaders was arrested and seven or eight were detained.

On February 19, 2021, a civil suit titled “Bhagwan Sri Krishna Virajman and Others Vs UP Sunni Central Waqf Board and Others” was filed before the court of the civil judge (senior division), Mathura, for removal of encroachment and structure illegally raised by the ‘committee of management’ of the Trust Masjid Idgah with the consent of the Sunni Central Board of Waqf. – IANS

BF.7 sub-variant, responsible for surge in China, to have little impact on India