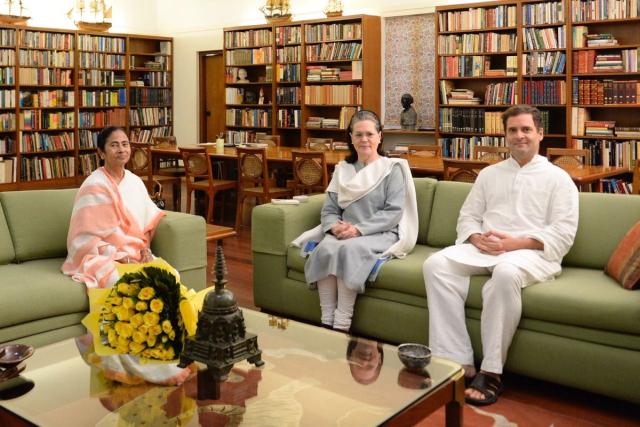 New Delhi: Seeking to rally opposition parties, West Bengal Chief Minister Mamata Banerjee on Wednesday met UPA Chairperson Sonia Gandhi and leaders of several other parties and declared that her priority is to defeat BJP in the Lok Sabha elections next year with the issue of prime ministership to be settled collectively later.

She also kept up her attack on the BJP over the exclusion of 40 lakh names from the National Register of Citizens for Assam, saying they were playing with fire and were using offensive language against those excluded.

Banerjee personally invited Sonia Gandhi, Rahul Gandhi and other opposition leaders for the January 19 mega rally she has planned in Kolkota.

The Kolkata rally is expected to help Banerjee emerge as the pivot of opposition efforts to dislodge the Narendra Modi government in 2019 Lok Sabha polls.

“There will be collective face. Ours is a collective family. Priority is to defeat BJP. If, to defeat BJP, we can fight collectively inside Parliament then why can we not outside…I haven’t come to talk about my state,” Banerjee said after her meeting with Sonia Gandhi and Congress President Rahul Gandhi.

While Shiv Sena is a constituent of the the BJP-led NDA, AIADMK is friendly towards it.

“Whenever I come to Delhi I meet Soniaji as I have very old relation with Rajivji. We have discussed political matters also. How we can fight together,” she said, indicating that Congress would be part of anti-BJP front.

“I don’t want to interfere in Congress matter or what Congress will decide… Wherever, whoever is strong should fight,” she said in reply to a question whether TMC will ally with Congress in West Bengal.

Attacking the BJP, she said the BJP “is nervous politically, tense politically.”

“The reason why it says whatever these days, because it knows it is not going to come back to power in 2019. If it talks with responsibility then we will talk to them. Not if they abuse us. I can fight against 500 parties in my state… We are all for all, everybody is everybody. PM will be decided later, first fight the election first,” she said.

Banerjee said she briefed Sonia Gandhi also on the problems of those excluded from the National Register of Citizens in Assam.

Earlier in her media interactions in Parliament House complex she sought to downplay questions about who will be the prime ministerial candidate of the Opposition.

“I am nobody. I am a very simple worker. Let me just continue as a commoner. I want that this BJP government must go. So we want that everybody should be united. Let us work together, don’t think of Prime Ministerial candidate. Think of the country,” she said.

Banerjee alleged that BJP was “doing maximum political vendetta” and atrocities with the people.
She said NRC is “a global issue and not just an issue of Assam or India”.

“They have deleted names of about 20-25 per cent of the total population. They are calling all of them Bangaldeshi infiltrators. Is Bangladesh a terrorist country? By saying this they are insulting both Bangladesh and India. They should not level baseless allegations against Bangladesh that they are sending infiltrators.”

Banerjee said if states say they will not accept people from other states, there will “be a civil war” and “bloodbath”.

“There is panic within people. Only one per cent will be illegal migrants,” she said.

Banerjee also said that if there was infiltration, it is government’s failure.

She said while Home Minister Rajnath Singh had assured that there will be no harassment of people excluded from NRC, BJP chief Amit Shah made remarks against those whose names have been excluded.

She had visited the national capital in March also and met opposition leaders.
(IANS)