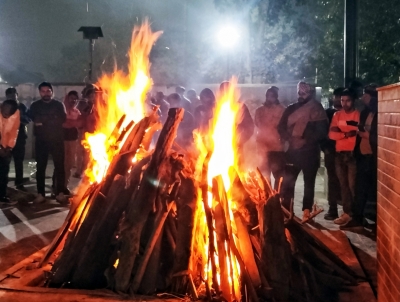 New Delhi, Jan 3 (IANS) The last rites of Anjali, the 20-year-old woman who died a painful death after being dragged by a car for about 12 km in the early hours of Sunday, were performed at the Shiv Puri Mukti Dham crematorium on Tuesday evening.

More than 1,000 police and paramilitary forces personnel were deployed along the stretch from the victim’s house till the cremation ground to avoid any untoward incidents.

Over 50 police vehicles escorted the ambulance in which the deceased’s body was taken for the final journey. However, nobody was allowed to enter the cremation ground except for the family members.

A large number of people gathered outside the cremation ground, carrying placards and photos of the victim, raising ‘Justice for Anjali’ slogans to mark their protest against the police.

“Where were the police when the incident took place,” asked an angry protester.

“Anjali should get justice. We demand capital punishment for the accused,” said Rampal, a resident of Karan Vihar.

“Where were the police when the victim was dragged for 12 km? How many police vehicles were there in the area,” asked another protester, adding that police personnel found guilty of negligence should be suspended.

Anjali died in a horrific accident on the outskirts of Delhi in the early hours of Sunday, after being dragged for around 12 km from Sultanpuri to Kanjhawala under the car that had hit her Scooty. Five persons who were in the car have been arrested are are presently in police custody. – IANS

Ajit Doval to talk about Sikh radicalization with his UK counterpart

National security advisor Ajit Doval is set to meet his UK counterpart Tim Barrow on Saturday in London for the annual strategic dialogue and is expected to convey India's serious...