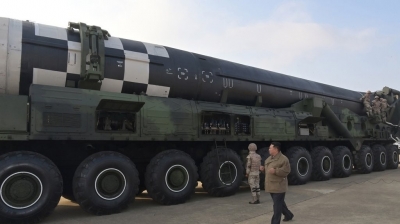 Seoul: North Korean leader Kim Jong-un declared a resolute nuclear response to threats by the US during an on-site inspection of the country’s test-firing of a Hwasong-17 intercontinental ballistic missile (ICBM) earlier this week, Pyongyang’s state media said on Saturday.

The missile, launched on Friday from Pyongyang International Airport, flew 999.2 km for 4,135 seconds at an apogee of 6,040.9 km and landed in the international waters of the East Sea, Yonhap News Agency quoted the North’s official Korean Central News Agency (KCNA) as saying.

“The test-fire clearly proved the reliability of the new major strategic weapon system to be representative of the DPRK’s strategic forces and its powerful combat performance as the strongest strategic weapon in the world,” the KCNA said in its report.

The DPRK is the acronym for the North’s official name, the Democratic People’s Republic of Korea.

It stressed that the firing was carried out under the “intolerable condition” that the “reckless military confrontational moves of the US and other hostile forces” driving regional security to the “red line” have gone beyond the limit.

It was referring to large-scale combined military drills recently staged by South Korea with some of key US strategic assets mobilised.

On November 3, the North had test-fired the same ICBM, but the launch was seen as a failure.

The launch came a day after North Korean Foreign Minister Choe Son-hui warned her country will take “fiercer” military actions if the US strengthens its security commitment to using a full range of military capabilities, including nuclear options, to defend the allies.

Shortly after Choe’s statement, the North launched a short-range ballistic missile into the East Sea.IANS