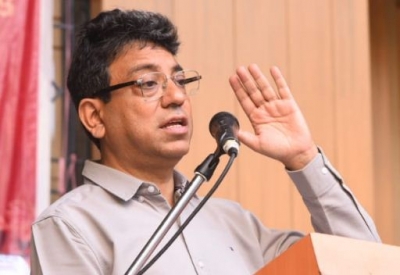 Bengaluru: Ruling BJP, which is under attack over the alleged voters’ data theft scam, has switched to damage control mode. As a first step, the government is all set to transfer Bruhat Bengaluru Mahanagara Palike (BBMP) Chief Commissioner Tushar Girinath, according to sources.

Though Chief Minister Basavaraj Bommai is trying to put a brave face by announcing a probe and dismissing Congress charges as ridiculous, insiders confide that party leaders are worried and concerned about the development.

Sources explain that Tushar Girinath had already been called to the Vidhana Soudha following an emergency press meet by Congress leaders in Bengaluru over the scam.

The Congress has collected ID cards provided by the authorities to BJP workers. The party is also trying to approach the Chilume institution which got the deal to conduct revision of voters’ list, and Higher Education Minister C.N. Ashwath Narayan.

The party had released photos of minister Ashwath Narayan attending Krishnappa Ravikumar of Chilume institution. Congress has stated that they had worked along with the media for more than three months to unearth the scandal.

Karnataka Congress President D.K. Shivakumar slammed Tushar Girinath, saying that he had high regards for the officer and he is wondering how he could stoop down to the level of letting data of voters’ stolen by impersonation.

Insiders maintain that ruling BJP has taken a decision to transfer BBMP Chief Commissioner to allow the matters to settle down sooner. BJP leaders maintain that the development has proved to be a setback for them in the threshold of assembly elections.

The elections would be held in less than six months in Karnataka.

Congress has openly challenged that BJP is manipulating the voters’ list as it is sure of getting defeated in elections. It is removing the voter names belonging to minorities, SC/ST and OBC’s. Congress also charged that empty houses are marked and voters are settled there to help BJP candidates.