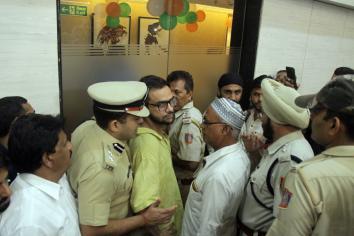 New Delhi: JNU scholar Umar Khalid, accused of raising anti-national slogans in 2016, on Monday survived an attempt to kill him in the heart of the capital, saying he escaped only because of his friends.

Police, however, said it was not clear whether the gunshot fired by the attacker was aimed at him or not.

A shaken Khalid told the media that a man approached him with a gun when he was outside the Constitution Hall, tried to overpower him and shoot him down.

“Thankfully, my friends were there with me. They tried to overpower him but he ran away and he fired from across the road.

“I was very scared at that moment when he pointed a gun at me. At that moment, I was reminded of what happened to (writer activist) Gauri Lankesh. I thought that moment has arrived,” Khalid said.

Joint Commissioner of Police Ajay Chaudhary said preliminary investigation showed that an unknown man dragged Khalid when he was with five friends at a tea stall outside the Constitution Club, not far from Parliament.

“A scuffle took place between them,” the officer said. “The accused managed to escape. It is not clear yet whether the attacker fired or not with his weapon.”

He said the case was being probed from all possible angles. A weapon found at the spot was being examined. “We have deployed the best officers to nab the attacker.”

Arif, a witness to the crime, said Khalid was with him when they were targeted. He said there were at least two attackers. But police spoke about only one attacker.

Deputy Commissioner of Police Madhur Verma earlier quoted Khalid as saying that someone pounced on him and pushed him around 2.30 p.m.

“Thereafter he tried to fire at Khalid. But the person couldn’t fire immediately,” Verma said.

The officer said the local police were not informed about the programme at the Constitution Club, a popular venue for seminars, meetings and press conferences.

The incident took place about half-a-kilometre from Parliament and behind the high-security Reserve Bank of India. The Constitution Club is itself located in a block of apartments, many of which are allocated to MPs.

Khalid was rusticated and fined by the Jawaharlal Nehru University last month after he along with two others — Kanhaiya Kumar and Anirban Bhattacharya — were found guilty of raising anti-national slogans at a poetry-reading event in the campus on February 9, 2016.

Khalid said he felt that Monday’s incident was an attempt to silence anyone who raise their voice against the Modi government.

He said that in the last two years, since the JNU episode which led to his jailing, “there has been misinformation everywhere” about him and his politics. He accused a section of the media of spreading propaganda against him.
(IANS)