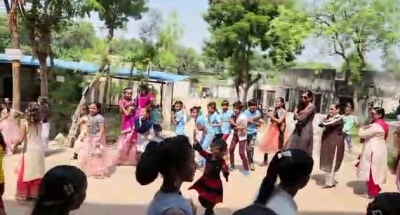 Kheda (Gujarat): Four teachers of Hathaj Primary School in Gujarat’s Kheda district were on Sunday suspended after they allegedly forced school students to chant ‘Ya Hussain’ at a garba event organised on Friday.

District Primary Education Officer K.L. Patel told IANS, “On Sunday morning, I along with other officers and police team visited the village, and after gathering facts from students and other school members, suspended four teachers with immediate effect. Teachers are suspended because in the garba event organised on Friday, ‘Ya Hussain’ slogans were chanted and school students were compelled to sing ‘Ya Hussain’. This has hurt the sentiment of the majority community.”

He has simultaneously asked the Taluka Primary Education Office to carry out an investigation and submit a report by Monday. Teachers suspended are Jagruti Sagar, Saberaben Vora, Ektaben Aakashi and Sonalben Vaghela.

He said on Saturday, Hindu Dharma Sena leaders had drawn my attention towards the incident. After which an inquiry was constituted against Hathaj Primary School teachers.

“Garba is Hindu festival in which another religion was promoted that has hurt the sentiment of the majority community and so Hindu Dharma Sena demanded swift and stern action against teachers,” said Rajan Tripathi of Hindu Dharma Sena.

“Parents came to know, when students told them after returning from school. Some 30 students wearing Muslim group T-shirts started chanting ‘Ya Hussain’, which was followed by Hindu students,” he alleged.