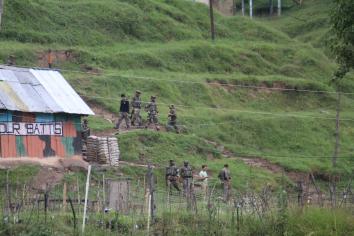 Srinagar: Four militants were killed and a para commando of the Indian Army was injured on Wednesday in an ongoing gunfight in the forests of Rafiabad in Jammu and Kashmir’s Baramulla district, police said.

Defence Ministry officials said four militants have been killed in the Dooniwari forests. The operation is still going on.

A para commando was injured in the gunfight and was evacuated to hospital for treatment.

Following specific information about the presence of militants in the area, the army started a cordon and search operation. The hiding militants fired at the forces, triggering the encounter, a police source said.

The encounter is going on, the source said, adding that these militants could have infiltrated into the hinterland from across the Line of Control (LoC). (IANS)

Karunanidhi laid to rest on Marina by his mentor’s side

Trade war– China hits back at US with new tariffs