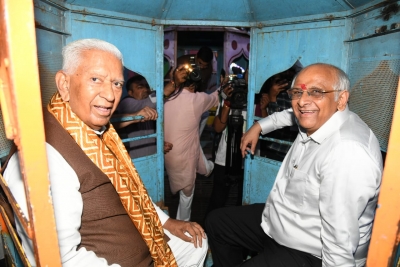 Vala was addressing a Dharma Sabha in Rajkot on Friday, where he quoted Modi’s recent statement from the Red Fort, “We have to fight against corruption and Parivaarwad,” Vala said Lord Krishna was fighting against one-sidedness during the Mahabharata Kal and Prime Minister was fighting against nepotism in present times.”

Vala said that he believes that to win all the 182 seats in the state Assembly was difficult, but not impossible for the Bharatiya Janata Party, with the commitment that the party works with and the determination with which it fights the elections.

Like other BJP leaders, Vala did not sound worried with the AAP’s entry in the state elections. He said even if third or fourth and fifth party enters the state’s electoral politics, only the BJP would win.

According to Vala, the people are well aware about which party has done what type of development work. The BJP is committed to the people’s welfare and that is the reason they vote for BJP only, he said.