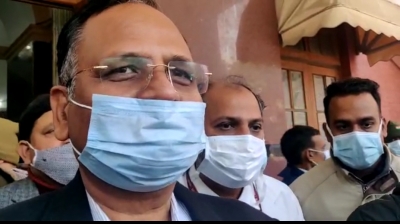 New Delhi: A Delhi court on Thursday refused to grant bail to Aam Aadmi Party (AAP) leader Satyendar Jain and two others in connection with a money laundering case.

Special Judge Vikas Dhull of the Rouse Avenue Court pronounced the order which was deferred earlier. The same judge was scheduled to pronounce the order on Wednesday.

However, the court deferred the matter, citing the order was not ready.

A detailed order will be made available later in the day.

Jain, whose bail has been denied in various hearings since his arrest in the PMLA case on May 30, is presently lodged in Tihar Jail.

As per the earlier submissions of the Enforcement Directorate (ED), the AAP leader was in de facto control of shell companies used for alleged money laundering, and co-accused Ankush Jain and Vaibhav Jain were just dummies.

On the other hand, Satyendar Jain’s counsel argued that the alleged role attributed to him does not fall in the ambit of Section 45 of the PMLA.

Earlier, the CBI had accused Satyendar Jain, his wife, and others of offences under the Prevention of Corruption Act.

On March 31, the ED provisionally attached immovable properties worth Rs 4.81 crore belonging to companies beneficially owned and controlled by the minister.

On June 6, the probe agency conducted raids at multiple locations belonging to Satyendar Jain, his wife and accomplices, who had either directly or indirectly assisted him or participated in the processes of money laundering.IANS

New Delhi: The Supreme Court on Friday stayed a Calcutta High Court division bench order, which upheld a single-judge's direction for a CBI probe into the multi-crore West Bengal School...

‘Even in the twenty-first century, we are left grappling with casteism’ India is still “unable to break the shackles of casteism Even secular government is forced to provide for separate...

New Delhi: The Supreme Court on Thursday agreed to reconstitute a constitution bench to hear a clutch of petitions challenging the constitutional validity of the practice of polygamy and...

The Supreme Court on Thursday asked the Union government whether the file of appointing Arun Goel as the Election Commissioner was cleared in 'haste' and 'in a tearing hurry'. The...

New Delhi: Attorney General (AG) R. Venkataramani, representing the Centre, on Thursday told a five-judge Supreme Court bench to "hold its mouth", as he faced a volley of questions in connection...

New Delhi: The Supreme Court on Wednesday told the Centre that it wants to see the files relating to the recent appointment of Arun Goel as Election Commissioner and emphasized...