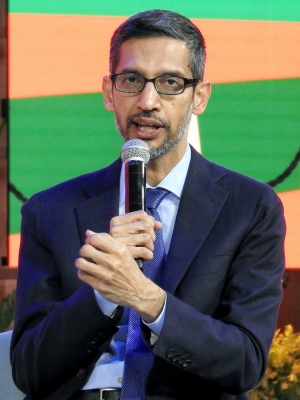 New Delhi: Alphabet and Google CEO Sundar Pichai on Friday said that he is “deeply sorry” for reducing the workforce by approximately 12,000 roles, and takes “full responsibility for the decisions that led us here”.

“In other countries, this process will take longer due to local laws and practices,” he added.

The roles the company is eliminating cut across Alphabet, product areas, functions, levels, and regions.

In the US, Google will pay employees during the full notification period (minimum 60 days) and also offer a severance package starting at 16 weeks salary, plus two weeks for every additional year at Google, and accelerate at least 16 weeks of GSU (Google stock) vesting.

“While this transition won’t be easy, we’re going to support employees as they look for their next opportunity,” said Pichai.

Google will pay 2022 bonuses and remaining vacation time to those impacted.

“We’ll be offering 6 months of healthcare, job placement services, and immigration support for those affected. Outside the US, we’ll support employees in line with local practices,” saod Pichai.

The Google CEO said that these are important moments to “sharpen our focus, reengineer our cost base, and direct our talent and capital to our highest priorities”.

The layoffs at Google’s parent company were expected amid the deepening funding winter that has hit companies of all sizes in the global slowdown and recession fears.

Microsoft Chairman and CEO Satya Nadella said earlier this week that the company will be “making changes that will result in the reduction of our overall workforce by 10,000 jobs through the end of FY23 Q3 (third quarter)”.

More than 1,600 tech employees are being laid off per day on an average in 2023 globally, including in India, and the sacking episodes have gained speed amid global economic meltdown and recession fears.

Amazon announced to lay off 18,000 employees globally, including nearly 1,000 in India.Govt issues guidelines for social media influencers; fine up to Rs 50L, 6-yr ban on repeat offence
Social media influencers and celebrities will face a fine of up to Rs 10 lakh, which can go up to Rs 50 lakh on repeat offence and even lead to a ban of up to six years, on violation of guidelines for them, which were released by the consumer affairs ministry on Friday.IANS

New Delhi: Indian startups raised about $1.2 billion in January amid rough macroeconomic conditions and funding winter. According to data by Fintrackr, an arm of startup news portal Entrackr, growth-stage...

New Delhi:  Apple has set another all-time revenue record for the India market, along with quarterly records in Brazil and India, its CEO Tim Cook has said. In the analysts'...

Mumbai : Reliance Retail on Thursday announced it has begun accepting retail payments via the Indian government's Digital Rupee across its stores in the country. Reliance Retail launched the first...

New Delhi:  Giving significant boost to MSMEs, the Union Budget 2023-24 has proposed to continue the financial sector reforms and innovative use of technology which have led to ease of...

New Delhi: Market linked debentures as an instrument will now be taxed as short-term capital gains as some experts said it was being used for blatant tax evasion. The Union...