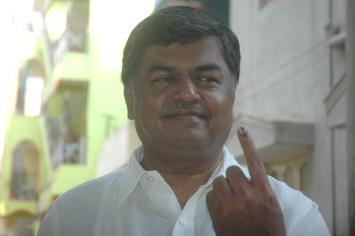 New Delhi: Congress MP B.K. Hariprasad was on Wednesday declared as the opposition candidate for the post of Rajya Sabha Deputy Chairman, election for which will be held on Thursday.

Hariprasad, who is into his third term in the Rajya Sabha, hails from Karnataka and has been a Congress General Secretary.

He said opposition leaders were present at the time of filing the nominations.

Sharma, who was accompanied by Hariprasad and NCP MP Vandana Chavan, accused the government and the BJP of “using every tactic, using the influence of their authority and power just to swing the election”.

“Hariprasadji is a senior parliamentarian. It is a joint decision of parties which have been meeting and deliberating for the last few days,” he said.

TDP, which broke away from the BJP earlier this year, signed Hariprasad’s nomination papers.

Sharma said the opposition had the numbers and there will be a contest.

He said Hariprasad is a “formidable candidate” and a “better candidate” than Harivansh of the ruling National Democratic Alliance. Harivansh belongs to Janata Dal (United).

“We have a formidable candidate not the NDA. The BJP, if it had the majority, should have fielded its own candidate…they lacked majority and that’s why they are desperate to reach out to others outside the fold of NDA,” Sharma said.

“Secondly, a formidable candidate is a parliamentarian who can conduct the proceedings, who understands the functioning of the House. When it comes to the two candidates, we have a better candidate,” he added.

Sharma said that by fielding a joint candidate the opposition has made a statement that “it is not happy with the present state of affairs and the prevailing environment in the country”.

Asked if there was a chaos in the Opposition and Congress had been forced to put up its candidate after other parties declined, Sharma said “this statement is incorrect”.

“NDA as such did not have a majority and does not have it now. They have gone well beyond the fold of NDA to get votes. It is true that the Congress does not have numbers on its own. Hariprasadji is not a Congress’ candidate alone. He is the candidate of the joint opposition,” he said.

Asked to elaborate on his accusation that the government is using its authority to swing the election, Sharma said “there is no post that the ruling party does not want to capture”.

“That is why the ruling party did not announce the election earlier. When a few days of the session were left, they suddenly made the announcement. It is obvious they acted to a strategy,” he said.

Sharma said no effort was made by the government, the Prime Minister or the Parliamentary Affairs Minister to talk to the opposition for a consensus. “They only informed us (about their candidate),” he said.

The Congress decided to put up a candidate after the NCP on Tuesday decided against putting fielding its candidate for the August 9 election.

Vandana Chavan’s name was being “actively considered” by opposition parties but NCP decided against fielding her, after apparently sensing that she would not get the support of Biju Janata Dal and Shiv Sena.

A Congress leader had said on Tuesday that the party was willing to contest the election from the beginning but had also offered to back any other Opposition candidate.

Officials said that all the motions for the election of Rajya Sabha Deputy Chairman will be moved on Thursday and taken for vote in succession. If a motion gets carried, others will not be taken up for vote.

Though the Opposition seemed to have an edge in the election initially, the NDA now appears to be carrying the momentum with likely support of AIADMK, TRS and also the BJD.

‘India is a secular country’, SC junks PIL to declare...

‘India is a secular country’, SC junks PIL to declare...