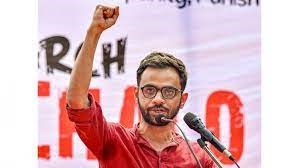 Noted rights activist and former JNU student Umar Khalid on Friday walked out of Tihar Jail after he was granted a one-week interim bail in connection with Delhi riots case to attend his sister’s wedding. He was granted bail from December 23 to 30 by a sessions court in Delhi.

“Umar Khalid has been released from Tihar Jail at 7 am today after he was granted interim bail for seven days to attend his sister’s marriage,” a prison official was quoted as saying by news agency ANI. Khalid had moved an application seeking two weeks’ interim bail — from December 20 to January 3.

Khalid and several others were booked under the stringent Unlawful Activities (Prevention) Act (UAPA) and provisions of the Indian Penal Code for allegedly being the “masterminds” of the February 2020 riots in northeast Delhi during the heat of protest against the citizenship regime – the Citizenship (Amendment) Act (CAA) and the National Register of Citizens (NRC).

The communal violence, which left 53 people dead and over 700 injured, took place during the visit of then US president Donald Trump. While the Delhi Police held him, other anti-CAA activists, responsible for the violence, a large section of Muslims and civil rights bodies attributed the violence to the open threat issued by BJP leader Kapil Sharma on camera in presence of police. Notably, Sharma had “warned” police to evict the anti-CAA protesters from the streets.

Earlier this month, Delhi’s Karkardooma court acquitted Khalid and Khalid Saifi in one of the cases linked to the 2020 riots. Saif has been a prominent figure of the anti-hate campaign, United Against Hate. The two were released on bail in this case but had to remain behind bars in connection with different cases.

Khalid was arrested by the Delhi Police in September 2020.

In yet another incident of atrocities against domestic help came to fore where a lawyer has allegedly dragged and tugged a domestic worker out of an elevator at a residential...

Lucknow:Lucknow University (LU) students are demanding that the ban on birthday celebrations on the campus should be lifted. They are also seeking scrapping of entry and exit timings restrictions...