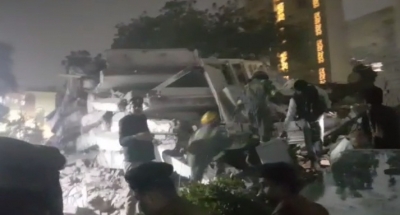 Lucknow: A portion of a residential building on Prag Narain road here collapsed here on Tuesday evening, and a number of people are feared trapped under the debris.

Chief Minister Yogi Adityanath has directed SDRF and NDRF teams to rush to the spot and start rescue and relief operations.

He has also directed officials to ensure proper treatment of those injured in the incident. Local residents said that the building collapsed shortly after tremors were felt in the state capital after the quake in Nepal.

The Union government has ordered to ban around 230 Chinese apps, including 138 betting apps and 94 loan lending apps, on “urgent” and “emergency” basis. According to an official, the...

The Rashtriya Swayamsevak Sangh (RSS) came to the rescue of the Adani group with the saffron group’s mouthpiece Organiser, in an article, saying that the attack on the beleaguered business...

Forgotten man in Pakistan politics, Musharraf passes away in Dubai

Islamabad : Former dictator, President and military ruler of Pakistan General (Retd) Pervez Musharraf breathed his last in Dubai after being critically ill for about two years. Musharraf, 79, was...

China denounces US move to shoot down unmanned ‘airship’

Beijing : China expressed strong dissatisfaction and opposition towards the US use of force to attack China's civilian unmanned airship, Chinese Foreign Ministry said on Sunday in a statement. The...

Peshawar: Thousands across Khyber-Pakhtunkhwa (K-P) took to the streets to record their protest against increasing lawlessness and terrorism in the region, demanding that the vulnerable police force be armed to the...

New Delhi: The Chief Justice of India (CJI), D.Y. Chandrachud said on Saturday that for the court, there are no big and small cases - every matter is important, and the...