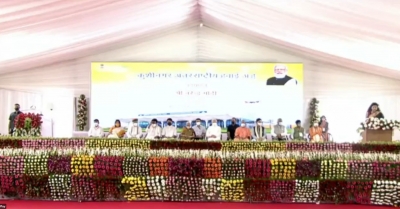 Kushinagar (Uttar Pradesh): One of the most prominent Buddhist places Kushinagar on Wednesday got air connectivity, with Prime Minister Narendra Modi inaugurating an International Airport here.

A high-level delegation comprising ministers and Buddhist monks from Sri Lanka were the first arrivals from the first flight that touched down at the Kushinagar airport on Wednesday morning.

Speaking on the occasion, the Prime Minister said the airport had come into being after years of efforts and was reflective of the aspiration of the people.

He said he was happy that he fulfilled his commitment to link Buddhist destinations, improve hospitality facilities and ensure the comfort of tourists. This airport will not only serve tourists from India but also Buddhists from across the world, including Sri Lanka, Thailand, Korea, Japan, Cambodia and other countries,” he said.

Modi said India had enhanced its connectivity by increasing the number of airports and in the coming years, India would have 200 more airports.

The Prime Minister pointed out that other Buddhist destinations like Lumbini, Sarnath and Bodh Gaya were at a short distance from Kushinagar which added to the importance of the Buddhist circuit.

“Flight academies are also being set up and our drone policy will benefit agriculture, health and other sectors, including disaster management.

The inaugural function was also attended by Union Minister for Civil Aviation Jyotiraditya Scindia, who said that flights from Kushinagar would soon begin for Mumbai and Kolkata and other destinations.

As many as 54 crore Buddhists across the globe would benefit with this airport becoming functional, Scindia said.

The airport is of great importance for religious tourism as Kushinagar is the place where Lord Buddha attained ‘Mahaparinirva. It has been built at a cost of Rs 260 crore and is spread over 3,600 square metres. The airport will also serve nearby districts of Uttar Pradesh as well as Bihar.

Uttar Pradesh Chief Minister Yogi Adityanath said that Kushinagar was the ninth airport in the state and 11 more were nearing completion. (With IANS input)