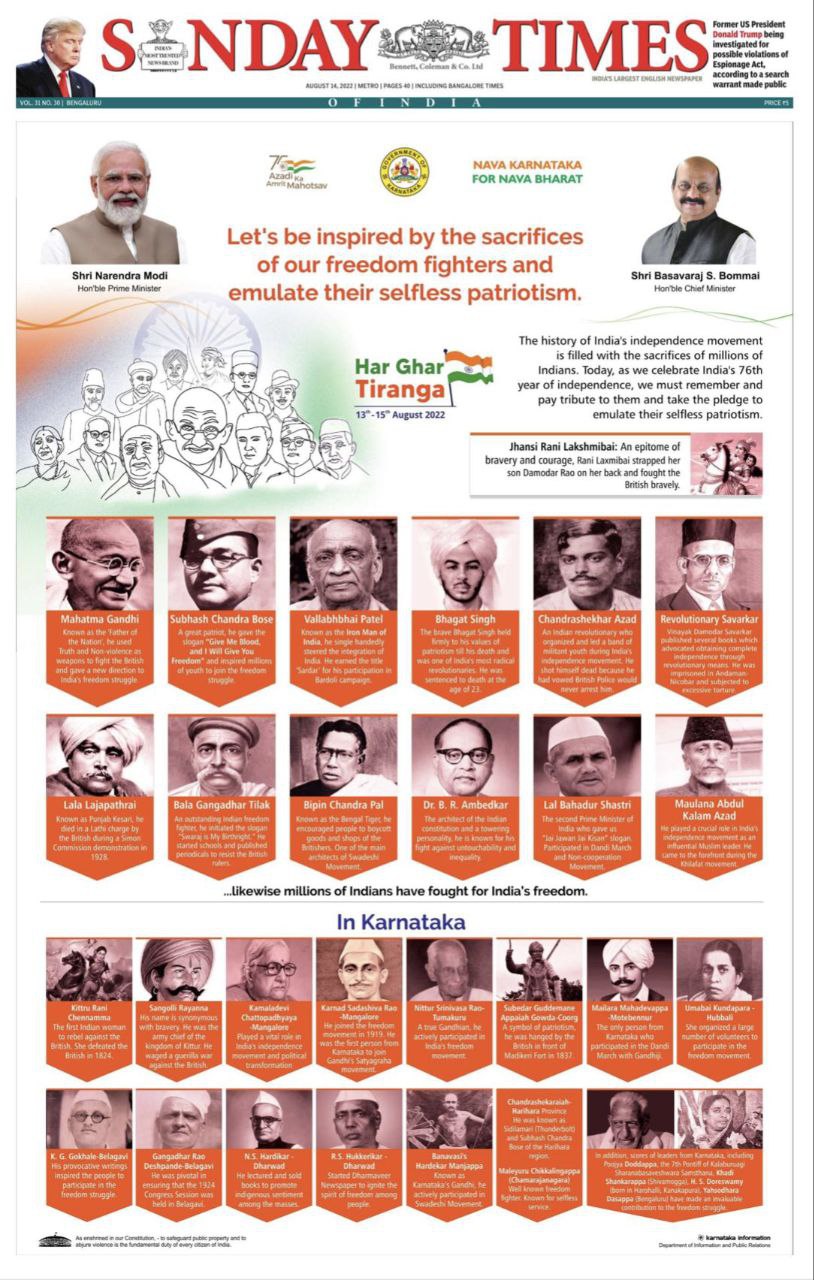 In its latest attempt to wipe out Nehru from the pages history of freedom struggle, the BJP Govt in Karnataka omitted first Indian PM Nehru from its freedom fighters list while adding Savarkar to the list.

The dropping of Jawaharlal Nehru from the list of freedom fighters in the Karnataka government’s media advertisement that appeared on August 14 draws flak from progressive writers and the Congress, which sought an apology from Chief Minister Basavaraj Bommai. While the BJP govt defended it, saying that Nehru was dropped as he was responsible for Partition.

In an open letter to the Karnataka Chief Minister, a host of progressive thinkers and writers said that dropping Nehru was shocking and showed that the BJP government in the State was working for RSS. However, Karnataka CM mentioned the former prime minister as a key contributor to the freedom struggle in his Independence Day speech. He said, “A large number of freedom fighters laid down their lives to liberate India from the British administration. The contributions and sacrifices of Mahatma Gandhi, Subhas Chandra Bose, Sardar Vallabhbhai Patel, Bhagat Singh, Maulana Abul Kalam Azad, Jawaharlal Nehru, and many others are historic.

To the amusement of Congress, PM Modi in his address to the nation on 75th Independence Day also ‘dropped’ Nehru’s name from the speech. PM said, “Our country is grateful to Gandhiji, Netaji Bose Babasaheb Ambedkar, and Veer Savarkar for their sacrifices.”

In another attempt, The BJP on the eve of Independence Day shared a seven-minute video narrating its version of events that led to the partition of India in 1947. The video, which used archival footage and visuals of the partition, marginally blamed Jawaharlal Nehru for accepting the demands of Muhammad Ali Jinnah and his Muslim League.

While Congress hits out at BJP saying, “The real intent of PM to mark Aug 14 as Partition Horrors Remembrance Day is to use the most traumatic historical events as fodder for his current political battles. Lakhs upon lakhs were dislocated and lost their lives. Their sacrifices must not be forgotten or disrespected. The modern-day Savarkar’s and Jinnah’s are continuing their efforts to divide the nation. The Indian National Congress will uphold the legacy of Gandhi, Nehru, Patel, and many others who were untiring in their efforts to unite the nation. The politics of hate will be defeated.”

PM touches upon corruption, nepotism in I-Day speech, sets out goal for next 25 years