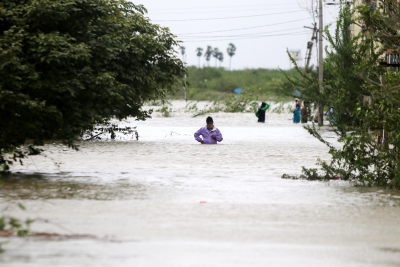 Guwahati, India News Stream: The death toll in Assam’s devastating floods has reached 8,  as lakhs of people were rendered homeless as the rising waters of the Brahmaputra and its tributaries taking newer areas into grip worsening the overall situation.

As per the latest Assam state disaster management authority (ASDMA),  as many as 403352 remained flood-affected while 39558 including 3749 children are lodged across 178 relief camps set up in the state.

A review meeting was held at Chief Secretary’s Conference Hall for stocktaking of the current situation in Dima Hasao, Hojai, Cachar and other Barak Valley districts.

The National Highway Authority of India (NHAI) was requested to restore the road connectivity from Guwahati to Haflong with immediate effect so that supplies and other essential commodities can be sent to the Dima Hasao district.

Indian Air Force (IAF) was requested to airdrop the most essential supplies like rice, daal, and medicines to Dima Hasao district by while 35 stranded railway employees and their families along with left out passengers at the New Haflong railway station would also be rescued with the help of IAF.

BSNL  has been asked to  restore the communication network.

Assam State Disaster Management Authority (ASDMA) will also use the services of drones/satellite data to ascertain the loss and damage data of the district.

The latest death was reported in the Udalguri district while one person was reported missing in the Nagaon district.

4,03,352 populations in 26 districts have been affected in the last 24 hrs in the State. There are 89 relief camps and relief distribution centres set across the affected areas.

A total of 39,558 inmates are staying in these relief camps.