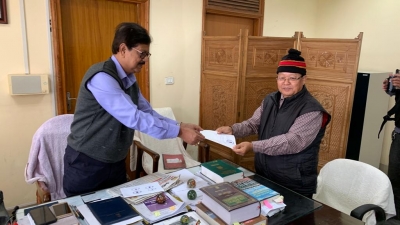 Agartala:  Ahead of the Assembly elections, ruling BJP suffered a jolt as one more legislator of the party, Diba Chandra Hrangkhawl resigned from the Tripura Assembly on Wednesday.

A veteran tribal leader, Hrangkhawl, who was elected to the state Assembly as a BJP nominee from the Karanchara Assembly seat in northern Tripura’s Unakoti district, is the 5th BJP MLA and 8th MLA of the BJP-IPFT (Indigenous People’s Front of Tripura) ruling alliance to quit since last year.

Accompanied by several Congress leaders, including former MLA Ashis Kumar Saha, the 66-year-old lawmaker submitted his resignation letter to the state Assembly Secretary Bishnu Pada Karmakar as the Speaker Ratan Chakraborty is away from Tripura.

“Hrangkhawl’s resignation would be accepted by the Speaker once he returns to the state,” Karmakar told IANS.

Hrangkhawl, who was elected to the state Assembly four times since 1988, after submitting his resignation letter, told the media that he has quit the party and the membership of the Assembly on personal grounds.

“I would decide my future course of action very soon,” said the tribal leader, who was close to BJP-turned Congress MLA and former minister Sudip Roy Barman.

Hrangkhawl is the 8th MLA of the BJP-IPFT ruling alliance to quit from both the Assembly and their respective parties since last year. Earlier BJP MLAs Burba Mohan Tripura, Ashis Das, Sudip Roy Barman, and Ashis Kumar Saha and IPFT MLAs — Mevar Kumar Jamatia, Brishaketu Debbarma and Dhananjoy Tripura also quit the party and the Assembly after open differences with the ruling parties and the government.

Das joined the Trinamool Congress last year but quit it in May this year while Roy Barman, also a former BJP Minister, and Saha joined the Congress in February this year.

Assembly elections to Tripura, Meghalaya and Nagaland are expected to be held in February 2023.IANS

Illegal immigration from India to US surged in last 2 months, doubled in 2021-22