Amit Shah on SC verdict on Guj riots: Nexus of NGO, some journalists and some pol parties that made Modi a villain 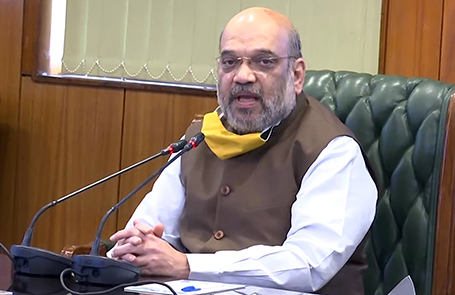 New Delhi: Reacting to the Supreme Court verdict upholding SIT’s clean chit to Narendra Modi, the then Gujarat chief minister, and now Prime Minister, in the Gujarat Riots case, Home Minister Amit Shah said it was ”a nexus of an NGO, Some journalists, and some political parties that were behind making PM Modi as a villain”

The Supreme Court of India on 24 June gave its verdict after 19 years in the 2002 Gujarat Riots case on a petition filed by Congress MP Ehsan Jafri’s wife Zakia Jafri and an NGO chellenging SIT findings.

Home Minister Amit Shah was a part of the Gujarat BJP as an MLA in 2002 .

“Teesta Setalvad and her NGO created the bad image of Narendra Modi and his govt. accusing him of being the person behind riots. Some politically motivated journalists had helped them spread lies out of proportions,” Shah said in an interview to ANI

“When UPA govt came in power at the Center after 2002, it helped Teesta Setalvad NGO to target Modi Ji.”
Further questioning the Congress’ role in it, he said, “After 60 innocents died in the Godhra train burning incident, not a single person from Congress condemned it, nor expressed any anguish. Only the BJP had condemned it. What happened after that ‘was an impulsive reaction by the public’, it was not pre-planned.”

When asked why PM Modi hasn’t spoken about the incident and the charges against him, Shah said, “Modiji endured it silently for 19 Years because the matter was subjudice and he hasn’t done any drama, no solidarity march or dharna. He cooperated with the court.”

Reacting to why the then CM Modi of Gujarat hadn’t done much to stop the riots, Shah said “Modi Ji had done everything to prevent the riots but with only 400 policemen against 2 lakh people, he could not do much. Controlling it takes time for any government because it was on such a big scale.”

In a time when press freedom in India is facing onslaught, Shah made an important point regarding it, as his party and government are continuously being accused of controlling the media. Though he said it in the context of Gujarat 2002, his statement is significant in the current context. “Our government doesn’t have this attitude of interfering in the work of the media. Neither we interfered at that time (Gujarat 2002) nor do we do it now.”

Shah added, “The top court has also rejected the ‘Tehelka Sting Operation’ because only after all footage came, it it became clear that the sting operation was politically motivated.”

In telling the history of the Gujarat Riots 2002 to the new generation, Shah stated, “SC judgment is very significant and historic. History of Gujarat 2002 should be based on this judgment because it rejected all the claims and allegations against our party and Modi Ji, clearing a stain on him.”