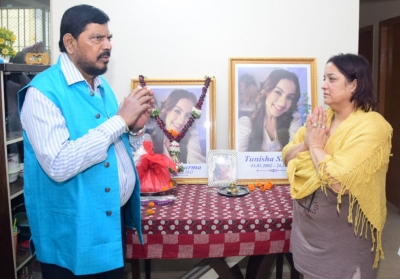 Mumbai: Union Minister of State for Social Justice Ramdas Athawale on Thursday called on the family of the late actress Tunisha Sharma at their home in Mira Road town in Thane and assured that justice will be done to them.

Athawale said that he met the actress’ mother Vanita Sharma and other relatives, and consoled them for Tunisha’s sudden death that has shattered the family.

Later, in a brief media interaction, he said that the Sharma family has demanded stringent action against Tunisha’s former boyfriend and co-actor Sheezan Khan for alleged abetment of her suicide on December 24.

“I have sought an in-depth investigation into this case… Khan had betrayed her and he should get capital punishment. I shall also meet Chief Minister Eknath Shinde and Deputy CM Devendra Fadnavis and request them to give a compensation of Rs 25 lakh to the family,” said Athawale.

Arrested on December 25, Khan, 27, is currently in police custody and the investigators have recovered a note in the green room of the sets of television serial “Ali Baba: Dastaan-E-Kabul”, where Tunisha ended her life.

The note purportedly mentioned the names of Tunisha and Khan with the words – “he’s blessed to have me as a co-actor. Woohooo”, though when it was written and its exact context is being probed.

The investigators are also poring over hundreds of pages of WhatsApp messages exchanged by Tunisha-Sheezan though nothing suspicious has apparently been detected so far.

Khan has said that he and terminated their relationship around a fortnight before Tunisha’s death, and her family said she lapsed into depression after the breakup.

After Tunisha’s death, her mom had issued a statement accusing Khan of cheating on her daughter, promising to marry her, then using her for 3-4 months before ending their relationship abruptly, even while going steady with Tunisha, he was hooked to another woman. – IANS

Selectors have to take the call overlooking beyond Rohit, Virat for next T20 World Cup: Gautam Gambhir