Train that takes you on ‘Shri Ramayana Yatra’ 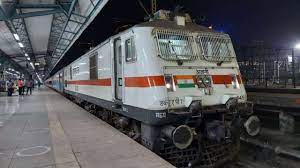 New Delhi: Railways are introducing a deluxe AC Tourist train that takes you on ”Shri Ramayana Yatra”, covering the mjor places associated with the life of Lord Ram.

The train, to be run by Indian Railway Catering & Tourism Corp Ltd (IRCTC), a public sector undertaking under the Ministry of Railways, will start from Delhi Safdarjung railway station on February 22, and will be having 3 additional destinations viz Buxar, Kanchipuram and Bhadrachalam.

Spanning over 19 nights/20 days, the first stop is Ayodhya where tourists will visit Shri Ram Janmabhoomi temple and Hanuman temple. Additionally there would be Bharat Mandir at Nandigram. After Ayodhya, next destination will be Sitamarhi in Bihar where Sita is believed to be born and Ram-Janaki Temple in Janakpur (Nepal) will be covered by road. Post Sitamarhi, the guests shall be taken to Buxar for a tour of the Ramrekha ghat and the local temples followed by Varanasi, where they will visit temples at Varanasi, Prayag, Shringverpur and Chitrakoot by road. Night stay will be arranged at Varanasi, Prayag and Chitrakoot respectively.

The next destination that the train travels to is Nasik wherein visit of Trayambakeshwar temple and Panchvati will be covered. Next destination after Nasik is Hampi which according to folklore is around the ancient monkey kingdom of Kishkindha. Here, the temple believed to be the sacred birth place of Shri Hanuman and other heritage and religious sites will be covered. Then the train chugs into one the holy Char Dham sites of Rameshwaram. Excursions include a visit of the eponymous Ramanathaswamy temple & Dhanuskodi.

The next destination is Kanchipuram which takes the guests through the Vishnu Kanchi, Shiva Kanchi and the Kanchi Kamakshi Amman temple. Bhadrachalam will be the last destination of this train tour after which train returns to Delhi on its 20th day of its journey. Guests will be travelling roughly 7500 Kms in this entire tour.