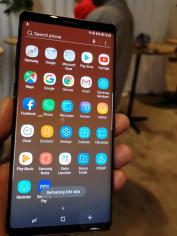 New Delhi: Samsung India on Friday opened pre-booking for its pen-focused flagship Galaxy Note 9, which will be available in 128GB and 512GB variants for Rs 67,900 and Rs 84,900, respectively.

India launch of the smartphone is likely to be before August 24.

Prospective buyers who pre-book the device will get a chance to own a Samsung Gear Sport smartwatch for Rs 4,999, which originally costs Rs 22,990, the company said in a statement.

All variants of the device will be available across retail and online stores, the company added.

The smartphone will also be available on Flipkart in India, for which the pre-orders will begin during its Freedom Day sale, a latest teaser on the e-commerce site suggested on Friday.

The South Korean giant announced that the smartphone will be available globally from August 24 and for the India market it will be manufactured at the company’s largest mobile manufacturing plant in Noida.

The 6.4-inch Note 9 comes in four colours and two variants — 6GB RAM and 128GB in-built internal memory (expandable up to 512GB) and 8GB RAM with 512GB ROM expandable up to 1TB with an additional 512GB microSD card — a delight for gamers and heavy-duty users.

The device runs Android 8.1 Oreo OS, the latest Qualcomm Snapdragon 845 chipset for the US customers and the models powered by Samsung’s very own “Exynos 9 Series 9810” chips will head to the rest of the world, including India.

The device has 12MP + 12MP dual camera system with dual optical image stabilization (OIS) at the rear — with two-times more powerful optical zoom and up to 10-times powerful digital zoom — and an 8MP front shooter.

Note 9 with Quad HD+ Super AMOLED display houses 4000mAh battery — 21 per cent bigger than Note 8 — that is paired with fast-charging technology compatible with both wired and wireless charging.
(IANS)

The Delhi Police on Friday inducted an all-woman Special Weapons and Tactics (SWAT) team, consisting of 36 commandos — the first-ever by any police force in India — for anti-terrorist operations.

Glaucoma may be an autoimmune disease: Study