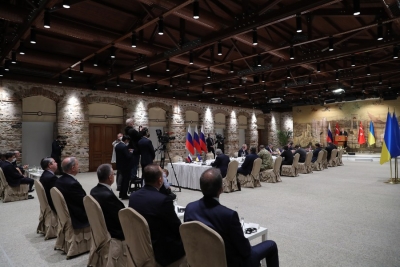 Russian and Ukrainian officials have said that negotiations on a solution to the ongoing war have been suspended as the process is mired in a stalemate.

“The talks are not going on. Ukraine has actually withdrawn from the negotiation process,” Xinhua news agency quoted Russian Deputy Foreign Minister Andrei Rudenko as saying to reporters.

Russia has received no response from Ukraine to its draft treaty, he added.

“Today the negotiation process was suspended. It was suspended because there are no significant changes or upheavals after the Istanbul communique,” Mykhailo Podolyak, a member of the Ukrainian delegation, was quoted as saying.

Nevertheless, he voiced the belief that the peace talks will be resumed, emphasizing that “every war ends at the negotiating table”.

Ukrainian and Russian negotiators held the latest round of face-to-face peace talks in Istanbul, Turkey on March 29. (IANS)