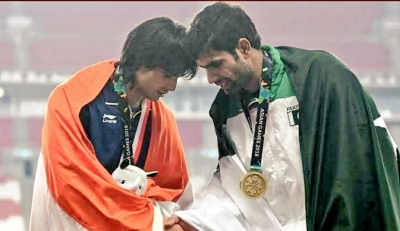 Pakistan’s Arshad Nadeem on Sunday scripted history, not just for his country but for the entire South Asia as he breached the 90m mark in Javelin Throw to clinch gold in the Commonwealth Games 2022, according news agency reports.

As per media reports, Nadeem came up with the stunning throw of 90.18m in his fifth attempt during the men’s javelin final in Birmingham on Sunday. With his throw, he also surpassed India’s star javelin thrower Neeraj Chopra’s personal best of 89.94m which the Indian star had achieved during the Stockholm Diamond League in Sweden this year.

Chopra didn’t participate in the event on Sunday after he was ruled out due to a groin injury, sustained during the World Championships last month.

Speaking to the press after the final, Neeraj revealed that he congratulated Nadeem on his performance and his superb return from injury. “I spoke to Arshad after the competition ended. I told him that he did very well. He replied that he had issues with his elbow. I further congratulated him for a great throw and it was a great comeback from his injury and it was commendable that he threw the javelin over 86 metres,” Neeraj said.

Back in 2018, during the Asian Games in Jakarta, a picture of Nadeem and Chopra had gone viral on social media where the two were seen greeting each other on the podium.

Neeraj is like our son, says Nadeem’s coach Bukhari

Nadeem and Chopra share a good camaraderie off the field. Nadeem’s coach Syed Hussain Bukhari is an admirer of Neeraj too, according to a Hindustan Times report. In fact, he stated that he would want to watch Neeraj play in Pakistan as well.

“Most of the time, Arshad trains at the Jinnah Stadium in Islamabad and Lahore too, my wish is to see Arshad and Neeraj compete at a packed stadium in Lahore or Islamabad. Neeraj is also like our son. I as a Pakistani promise you that if Neeraj wins, we will shower him the same love we showered on Milkha Singh Ji when he won against Abdul Khaliq in Lahore in 1960. Athletes share a common bond of love for the sports,” Bukhari told Indian Express.

Explainer: Why Bihar coalition appears to be on the verge of collapse