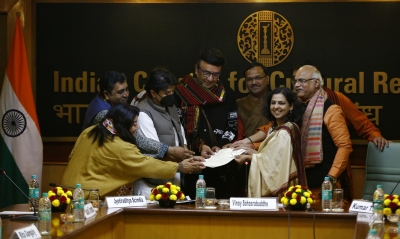 New Delhi, Dec 23 (IANS) The Indian Council for Cultural Relations (ICCR) and musicians, singers and artists on Thursday submitted a memorandum to Civil Aviation Minister Jyotiraditya Scindia requesting him to make it mandatory to play Indian classical or light vocal and instrumental music in flights operated by Indian companies.

“ICCR joins the fraternity of musicians, singers and artists associated with traditional music, in demanding that playing Indian classical or light vocal and instrumental music in aircraft being operated in India and also at various airports, be made mandatory for all India based airlines,” said the memorandum submitted to Scindia.

The memorandum pointed out that music played by most airlines across the globe is the quintessential of the country to which the airline belongs. “For example, it is most likely that we shall come across Jazz in an American airline or Mozart in an Austrian Airline and Arab music in an Airline from the Middle East. However, it is extremely unfortunate and even ironical that most airways in India however — both Domestic and International, seldom if at all play Indian music,” it said.

The memorandum further stated: “Our music mirrors our rich heritage and culture and it is one of the many things every Indian has a reason to be truly proud of! We hereby ardently request you to look into this matter and take steps to bring about the long-needed change.”

Sahasrabuddhe said that the civil aviation minister gave a positive response to the demand to play Indian music. – IANS

World’s largest fish at Vizag beach, guided back to sea