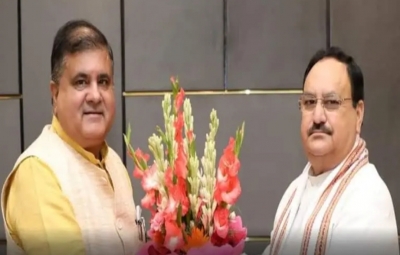 New Delhi: Breaking the trend of no incumbent regaining power after five years, the BJP formed its government in Uttarakhand early this year but its decision to appoint Pushkar Singh Dhami as the Chief Minister despite his defeat in the polls has not gone down well with its veteran leaders.

Moreover, certain remarks of two of its former chief ministers– Trivendra Singh Rawat and Tirath Singh Rawat — have often put the saffron party and the Dhami-led government in a tight spot.

Recently, Tirath claimed that nothing gets done in Uttarakhand without paying commission which gave the opposition Congress an opportunity to attack the Dhami government.

According to sources, BJP’s Uttarakhand president Mahendra Bhatt met the party’s National President J.P. Nadda in connection with the matter following which, the High Command summoned both the chief ministers to Delhi.

On Thursday, Trivendra met Nadda and presented his side of the story, said the sources.

The war of words between leaders does not seem to end in the state despite the high command’s constant efforts, as Trivendra stood by his stance several times while meeting Nadda.

Dhami is awaiting a strict decision by the higher ups so as to save his government from political attacks by its own members.

New Delhi: President Droupadi Murmu on Saturday raised the issue of overcrowding in prisons and emphasized that there is a need to do something for the poor people in jails....

PM Modi: Some nations support terrorists as part of their foreign policy