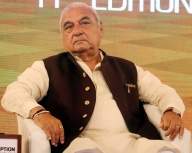 Chandigarh, Jan 19 (IANS) Congress leader and former Haryana Chief Minister Bhupinder Singh Hooda on Thursday came out in support of players protesting against the Wrestling Federation of India, saying the government should act against the culprits.

He said in a statement that “it is a matter of great misfortune and shame that our players, the pride of the country, have to protest on the streets today”.

Hooda said the allegations against the officials of the Wrestling Federation of India are serious and worrying. “The government should take strict action against the culprits by conducting a fair and transparent investigation.”

The state’s Leader of Opposition said the sportspersons who bring glory to the country “are also being forced on a sit-in protest”.

Hooda said definitely all these wrestlers are the players of the country, but the state government should also remember that most of the players belong to Haryana.

“It is the responsibility of the state government to protect the rights of the sportspersons and stand with sportspersons, but the silence of the Haryana government in this matter is very disappointing. The state government has earlier also kept silent in cases like sexual harassment, be it the allegations levelled against the Sports Minister of the state or the allegations levelled against the Wrestling Federation of India,” he said.

Hooda demanded that the Central government should take further action considering the demands of the players without delay. – IANS