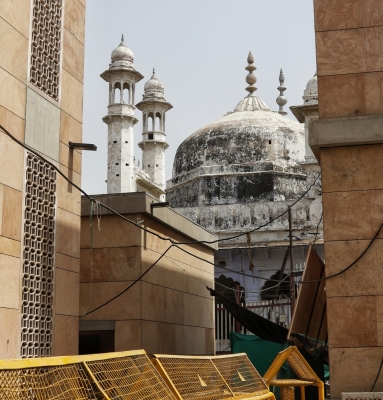 Varanasi: The Gyanvapi case has been posted for hearing on July 4 by the Varanasi district court which will further hear arguments on the maintainability of a plea by five Hindu women seeking permission for daily worship of the Shringar Gauri Sthal within the Kashi Vishwanath-Gyanvapi complex.

The Muslim side, on Monday, presented their argument and registered their point-to-point objections to the Hindu side’s plea in court.

Five Hindu women have sought round-the-year access to offer prayers at the Shringar Gauri Sthal in the Kashi Vishwanath-Gyanvapi complex.

The Muslim side has argued that the plea is not maintainable as the Places of Worship Act, 1991 prohibits the conversion of a place of worship and orders the maintenance of the religious character of any place of worship as it existed on August 15, 1947.

A lower court in the city had ordered a video survey of the complex after the plea was filed by the women. The Hindu side, after the survey, claimed that a ‘Shivling’ was found at the wuzukhana of the mosque.

The Muslim side moved the Supreme Court earlier this month demanding that it decide on the maintainability of the plea against the backdrop of the Places of Worship Act.

Their lawyer also appraised the top court of the survey report being leaked to the media despite a court order against it and accused the Hindu side of leaking the report to alter the narrative.

The Varanasi Civil Court had sacked the commissioner it had appointed to lead the survey over the alleged leak.

The Supreme Court transferred the case from the civil court to a district court, citing the “sensitivity” and “complexities” of the case.

A senior and experienced judicial officer must hear the case, the Supreme Court said.IANS