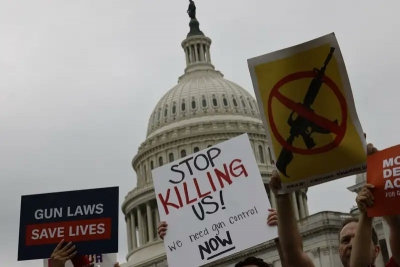 New York: US President Joe Biden has put his official seal of approval to the bipartisan Safe Communities Act (that seeks gun control and end to violence) to make it an enforceable law after both Houses of the Congress passed the gun reforms legislation in the swiftest manner possible with a good majority before the Parliament was set to take a two-week recess.

“Lives will be saved,” said Biden after he approved the Senate and Houses’ most sweeping anti-gun violence laws in almost three decades over which a bipartisan committee of 20 Senators, drawn in equal halves from the Republican and Democratic parties, negotiated hours on end to get a framework legislation to pass in both Houses.

The legislation falls short of all the demands of the Democrats while for the Republicans it’s a face-saving gesture with the American public crying wolf for strict gun laws in the aftermath of the mass shootings in Buffalo super store in New York and Texas public school in Uvalde that claimed 10 black lives and resulted in the death of 19 school children and two teachers in the most horrific slaying of the innocent common people.

Signing off on the bills of Congress to make it official law enforceable throughout the United States, Biden said, “Lives will be saved. Their (grieving families that suffered the Texas and Buffalo shootings) message to us (Congressmen) was to do something. Well today, we did.”

“While this bill doesn’t do everything I want, it does include actions I’ve long called for that will save lives,” he added.

The House of Representatives, the lower house of Congress, gave the much-needed final approval on Friday, endorsing an earlier upper house Senate approval to the gun reforms bills, considered the most significant in 30 years, even if it meant not enough for the Democrats and a compromise for the gun law favouring Republicans who wanted an upright public image.

The country is in the middle of midterm polls following reapportionment of constituencies (delimitation of constituencies) and ahead of a major ballot on November 8 this year where all 435 seats are up for grabs.

Biden now leaves for Europe, particularly Germany, where in the G7 summit he is expected to have a one-on-one meeting with Indian Prime Minister Narendra Modi.

The bipartisan legislation is not as tough as the New York state’s 10-pack gun law reforms that seeks to eradicate gun violence on the streets, as the city records most racist and hate crimes ending in shootings, needing tough laws. It does achieve something – enhances background checks for the youngest gun buyers, keep firearms from more domestic violence offenders and help states put in place red flag laws that make it easier for authorities to take weapons from people adjudged to be dangerous to themselves and others.

ABC News reporting on the presidential approval and the passage of bills claims that most of its $13 billion cost will help bolster mental health programmes and aid schools, which have been targeted in Newtown, Connecticut, and Parkland, Florida, and elsewhere in mass shootings.

American citizens had gone into a protest spree outside the Capitol Hill, soon after the US Supreme court struck down a centuries old NY gun law as restrictive and violative of the constitution — the 2nd amendment that entitles citizens to possess guns and carry it concealed on themselves while venturing out into unsafe areas for self-defence.

The Bipartisan measure brings a level of comfort for citizens calling for an end to gun violence after they were jolted by the Supreme Court’s 6-3 ruling on Thursday, striking down a 100-year old New York law that restricted peoples’ ability to carry concealed weapons.

Certainly, the bill does not carry all the provisions of tough laws that the Democrats have been campaigning for years, as it does not include a ban on assault-type weapons and background checks for all gun transactions, but it is still considered the most significant firearms violence measure from the Congress since the 1993 enactment of now-expired assault weapons ban.

Enough congressional Republicans joined Democrats in supporting the steps after the recent rampages in Buffalo, New York and Uvalde, Texas. It took weeks of closed-door talks, but the Senators emerged with a compromise, said ABC news.

Biden held the signing ceremony just before departing for a summit of the Group of Seven leading economic powers – the United States, Britain, Canada, France, Germany, Italy and Japan – in Germany. He will later travel to Spain for a NATO meeting.

It goes to the credit of the leadership of John Cornyn, Republican from Texas, who literally defied party leadership of ex-President Donald Trump and led the 20 Senators to patch up the bipartisan leadership in time for passage before the Congress recess of two weeks from July 4.

Republicans supporting the gun laws had more foresight to make the compromise in a midterm election year to woo the voters ahead of the House elections for all the 435 seats, in which election analysts predict a Trump victory as Biden is yet to show results in resolving thorny issues such as security of the people, controlling a runaway inflation, joblessness due to the pandemic and a severe shortage of baby foods.

But the Democrats are still backed by the elders of black and white communities while the Hispanics and white youth are still in a mood swing as to whom to vote for — they had voted for Biden in the 2020 elections.

The Senate judiciary committee probing the January 6 hearings on the Capitol Hill riots allegedly incited by ex-President Donald Trump, who allegedly falsified accounts of a stolen election and virtually blackmailed his VP Mike Pence to overturn the 2020 verdict, will have an impactful resonance on the November 8 House elections.

If Trump is impeached, then the election results could go either way. But the new gun law reforms are not going to weigh in with the voters unless soaring gas prices and runaway inflation are brought under control by the Biden administration. (IANS)

The Constitution, the Governor and the Shiv Sena imbroglio