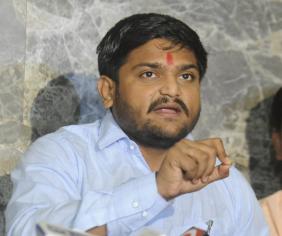 Ahmedabad: The Gujarat High Court on Wednesday suspended the jail term awarded by a trial court to Patel quota agitation leader Hardik Patel in a 2015 rioting case. The stay order, passed by Justice S. H. Vora, would be valid till the next hearing.

“The High Court has given its order in a case filed by me. Now whatever process is required in the High Court, we will do that,” Hardik Patel told reporters soon after the order. “I have been maintaining that we have not carried out any illegal activity that we should be punished.”

A mob of up to 500 people had turned violent and vandalized the then BJP legislator Rushikesh Patel’s office during a rally organised in 2015 to demand job and educational quota for the Patel community.

Other than Hardik, two others who got jail term include Sardar Patel Group leader Laljibhai Patel and A. K. Patel. Fourteen others who were also booked for rioting, arson, damage to property and unlawful assembly, were, acquitted by the trial court.

“We have been working for truth and if I raise the issues of people and you want to dub Hardik as a rebel, then I am a rebel,” Hardik said adding that he would undertake an indefinite fast on August 25, the third anniversary of the first mega rally of Patels in 2015.

“The government may have converted the venue of my fast into a parking lot but there are 11 other venues nearby. I would meet Police Commissioner and Collector on Friday and this would be the last warning for them to agree or disagree. We are seeking permission as per our democratic rights and hope that they would agree,” Hardik said.
(IANS)

Trade war– China hits back at US with new tariffs