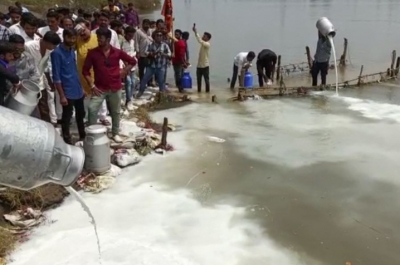 Gandhinagar: The state Assembly on Wednesday unanimously withdrew the Gujarat Cattle Control (Keeping and Moving)In Urban Areas bill (GCCUA) which was aimed at controlling the movement of stray cattle from wandering on the roads and public spaces.

The move has come as a partial victory to pastoralists who had opposed the bill by not contributing milk to the dairies or selling it in the open market.

Last week, the Governor returned the bill passed in a hurry on March 31 with a majority vote.

The said bill was hurriedly passed by the state government in March as the High Court had pulled up the state over stray cattle menace and increasing fatal accidents in the urban areas. It had asked the government to take strict action against the ‘maldharis’ who are leaving their cattle on the roads.

Maldhari Mahapanchayat and its member pastoralists were agitating against the bill saying it was an harassment to them, said Nagji Desai, president of the Mahapanchayat. In protest, the mahapanchayat had given a call to not contribute milk in dairies or sell it in the open market on Wednesday, and it has received a very good response.

Commenting on the pastoralists boycotting milk contribution to dairies, Gujarat Cooperative Milk Marketing Federation (GCMMF) Managing Director R.S Sodhi told IANS, “There was no impact on milk procurement, our normal daily milk procurement is 190 lakh litre milk per day and on Wednesday too the procurement remained same, there will be no shortage of supply on Thursday too.”

Some people faced shortages not because of short supply, but because of panic buying by customers.

New Delhi: The union cabinet on Wednesday cleared the government's ambitious National Green Hydrogen Mission with an outlay of Rs 19,744 crore. It aims to make India a global hub...

. OPEC oil cartel and its allies, including Russia may consider biggest cut . Oil prices shot up by as much as 4 per cent on Monday .OPEC+, controls more...

New Delhi: The  Government will allow more feedstocks for production of biofuels and it will also advance the 20 PC blending of ethanol in petrol to ESY 2025-26 from 2030. These...