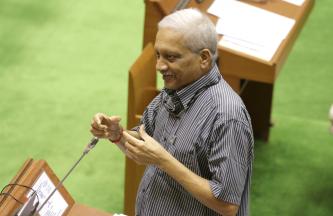 Panaji: The Goa Assembly on Friday unanimously passed a resolution empowering the state government to urge New Delhi to amend a central legislation governing the mining sector, in a bid to resume mining operations in the state.

All mining activity had been banned by the Supreme Court earlier this year.

The private member’s resolution moved by Bharatiya Janata Party (BJP) MLA Nilesh Cabral on Friday empowers the Goa government to request the Centre to appropriately amend the Goa, Daman and Diu Mining Concessions (Abolition and Declaration as Mining Leases) Act, 1987, which would make mining leases in Goa valid since 1987 when the act was actually promulgated and applied to Goa, rather than 1961.

“We will take it up with the Centre,” Chief Minister Manohar Parrikar, who is also the Minister for Mines, told the state assembly. The Chief Minister also said that he would be visiting Delhi soon to meet Prime Minister Narendra Modi to find a solution to the vexed issue, as well as meet senior ministers concerned in the Union Cabinet.

The mining issue has been hanging fire in Goa ever since the apex court banned extraction and transportation of iron ore from 88 mining leases from March, while also directing the state government to re-issue mining leases.

The is second time in less than a decade that all mining activities in the state has come to a standstill.

The 2012 ban was later lifted by the apex court in 2014, but the court was forced to impose the fresh restrictions while slighting the state government for messing up with the lease renewal processes.

Before Goa was liberated by the Indian armed forces in 1961, mining leases in Goa were permanent concessions granted by the Portuguese colonists for exploration and exploitation.

Once India took over the new colony though, the Central government via the Goa Daman and Diu (Abolition of Concession and Declaration as Mining Leases) Act, 1987, converted the same concessions into mining leases under the Mines and Minerals Development Act, 1954, making them valid for a fixed tenure, which lapsed in 2007.

Though passed by Indian Parliament in the year 1987, in case of Goa, a late entrant into the Indian Union, the law was retrospectively brought into effect from 1961, the year Goa was liberated from Portuguese yoke.

The Supreme Court in its February 2018 order, has now held that any mining carried out since 2007 was illegal.

In his speech in the state assembly on Thursday, Parrikar has proposed an amendment to Section 2 of the Act, which is aimed at altering the retrospective date of conversion of concessions to leases from 1961 to 1987, the year when the law was actually passed in Parliament. The amendment, he said, would extend the validity of leases from 2007 to 2045.
(IANS)