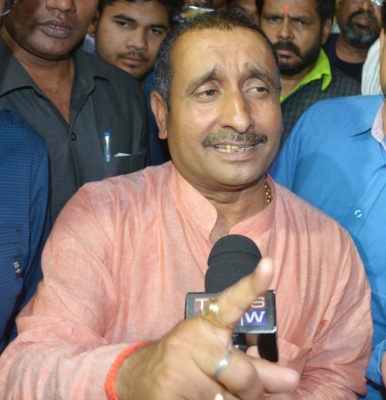 New Delhi, Jan 16 (IANS) The Delhi High Court on Monday granted interim bail to former Uttar Pradesh BJP MLA Kuldeep Singh Sengar, who was handed imprisonment for life for raping a minor girl in Unnao in 2017, in view of his daughter’s marriage.

A division bench of Justices Mukta Gupta and Poonam A. Bamba asked Sengar to report to the concerned Station House Officer on a daily basis during his bail period and furnish two sureties of Rs 1 lakh each.

Justice Gupta also raised a concern saying that Sengar daughter’s wedding ceremonies have been scheduled for so many days and everything can be completed in a few days.

In response, counsel representing Sengar submitted that he is the father and the ceremony dates are given by the priest.

Two senior advocates namely N. Hariharan and P.K. Dubey, who appeared for Sengar, informed the court that as Sengar is the only male member in the family, he has to make all the wedding arrangements, which are going to be held in Gorakhpur and Lucknow.

Meanwhile, the counsel representing the Central Bureau of Investigation (CBI) said that a status report has been filed by the agency and it was found that two halls have been booked for the wedding rituals.

The High Court, on December 22, 2022, had issued notice and directed the CBI to verify the facts of Sengar’s bail plea and place a status report on record. The same bench had directed the CBI.

On December 19, Sengar had sought two months’ interim bail from the court for attending his daughter’s wedding, which is scheduled on February 8, 2023, and ceremonies will start on January 18.

Sengar’s plea against the trial court’s order in the rape case is pending in the high court, with him having sought reliefs like quashing of the trial court’s December 16, 2019 judgment, which convicted him, and the December 20, 2019 order sentencing him to imprisonment till the rest of his life.

The trial court had convicted Sengar under various provisions, including Section 376 (2) (rape committed by a public servant) of IPC and also imposed an exemplary fine of Rs 25 lakh on him.

The trial started on August 5, 2019, after the Supreme court on August 1 directed to transfer all five cases related to the matter from Unnao to Delhi.

The top court had directed to hold trial on a daily basis and complete it within 45 days. – IANS