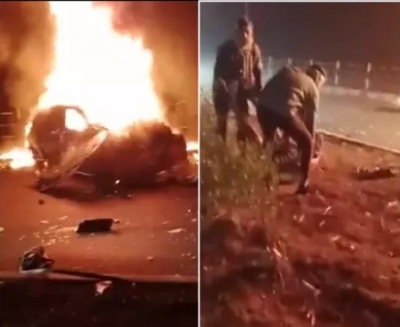 Dehradun, Dec 30 (IANS) Indian wicketkeeper Rishabh Pant was saved by the driver and conductor of a Haryana Roadways bus, when he met with an accident early Friday morning.
The 14-second CCTV footage of the accident, which surfaced online showed that his speeding car collided with the iron barrier on the roadside, before catching fire.

The driver and the conductor acted promptly and called 112 immediately after the collision.

The police sent Pant to the hospital and informed his mother.

SSP Ajay Singh, who took him to the hospital in his vehicle, said that further investigation in the matter is underway. – IANS