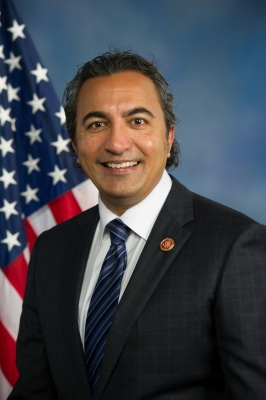 New York: Ami Bera has been reelected to the House of Representatives, ensuring the “Samosa Caucus” has five Indian American lawmakers in Congress.

The longest-serving Indian American in Congress, Bera was declared winner on Tuesday night even as the counting of votes was continuing in his California House district a week after the November 8 election.

They lightheartedly call themselves the “Samosa Caucus”.

The last time there were five lawmakers of Indian origin in Congress was in 2020 when Kamala Harris was a senator before her election as Vice President.

Bera is campaigning for a leadership position in the House Democratic Party, Politico reported.

It said that he wrote to party colleagues making his case to be elected chairperson of the Democratic Congressional Campaign Committee citing his efforts as the head of its frontline programme that helped vulnerable party candidates blunting the Republican margin.

The committee works to elect party members to the House and its head, who ranks sixth in the party’s hierarchy in the House, wields considerable influence.

Although only 67 per cent of the votes were counted as of Tuesday, Bera was ahead of his Republican rival Tamika Hamilton by 13.2 per cent or 15,964 votes, a margin giving him a pathway to victory, declaring him the winner.

After constituencies were redrawn in the ten-yearly exercise, Bera moved from his constituency centred around California’s capital Sacramento to a nearby one that includes more suburbs while also retaining parts of Sacramento.IANS

Republicans finally have House, but US gets ‘divided’ govt