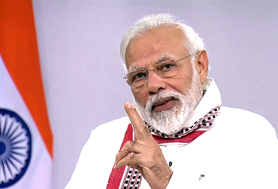 Lock down extended till May 3; Oppn questions ”lack” of any strategy for poor

New Delhi: Prime Minister Narendra Modi on Tuesday announced the lock down enforced on March 24 for fighting corona pandemic has been extended till May 3, but certain essential activities will be given conditional permission after April 20.

The Opposition while welcoming the extension, raised several questions over what it called lack of any strategy to protect the people, especially millions of poor who had lost their livelihood due to the lock down, and also lack of testing facilities and protective equipment for the health staff.

In a televised address to the nation, the Prime Minister said the Government will give some relaxation after April 20 in the areas which perform well in fighting corona, after evaluation of the situation in different parts of the country, and for this detailed guidelines will be issued tomorrow.

”After discussing the issue with all states and taking their inputs into consideration, it has been decided to extended the existing lock down till May 3,” he said, while appealing to the people to show more patience in their individual interest and the country’s interest as a whole.

”I know the lock down has a big economic cost, but the life of Indians are more precious than anything else, ” he said.

The Prime Minister admitted that the lock down had led to severe difficulties for thousands of people, especially the poor, but said these steps were a must to contain the spread the virus.

He said some more essential activities with strict conditions will be allowed in those areas where cases of corona virus are negligible so that the poor, especially the daily wagers and labourers, could earn their living, but the relaxation will be withdrawn if any area was found violating the lock down norms.

For one week till April 20, there will be very strict enforcement of lock down and very close monitoring of the situation, following which decision regarding relaxation will be taken.

The Prime Minister said India was much better than other countries of the world in its fight against corona, and this was due to the timely steps taken by the Government.

Modi invoked Ambedkar, Tuesday being his birthday, and said its a common fight and needs to be won together. As of Tuesday morning, India has 8,988 active corona cases and 339 related deaths.

He asserted while tests of more suspected Corona patients have significantly gone up, the country has simultaneously ramped up its corona infrastructure. “We have one lakh beds and there are 6,000 hospitals only for corona-infected patients,” claimed the Prime Minister.

Making a global comparison to suggest how strict and early measures helped India arrest the surge, Modi said: “India started screening at airports even before we had one one corona positive patient in India.. Even though we had 550 cases, India took a big decision to completely shutdown India. We didn’t wait for the problem to erupt.”

While he himself appeared wearing a homemade mask, he urged all Indians to wear one as well. As India continues to report bizarre incidents where doctors or police personnel are being targeted, sometimes in the most brutal way, as it recently happened in Punjab, PM appealed to respect the coronawarriors, for whom he earlier had urged Indians to clap and light candles for.

As Modi finished his nearly 25 minutes address to the nation, the bottomline was simple – Get rewarded for not creating more hotspots and be empathetic at this hour of economic difficulty.

He also said there were sufficient stock of food grains and medicines in the country.

Modi listed ‘7 Mantras’ to fight corona effectively . Firstly, he advised people to take special care of the elderly, especially those with pre-existing illnesses, besides strictly adhering to social distancing norms that have been so far effective in combating coronavirus. He also them to follow the guidelines given by the Ayush Department.

Fourthly, he appealed to every citizen to download and use the Aarogya Setu App. This app has been developed especially to track coronavirus cases.

Fifthly, he appealed to the people to help the poor and needy especially by providing food and protective gear such as face masks.

Sixthly, Modi asked employers to have compassion at this time of crisis and not to resort to layoffs of their employees.

Finally, he asked to show respect to health workers who are in the forefront in the battle against Covid-19.

“The Prime Minister has spelt out what the citizens what to do, but he has not told what the government is doing for the country and people,” said Congress leader Manish Tewari.

The Congress posed questions on the uniform strategy on testing and how it was going forward on this, whether the testing will be in hotspots or in the containment areas or every where.

The party has asserted that the key to the containment was testing.

The Congress also raised the situation of the quarantined labourers. “The labourers who had been quarantined and now test negative, will they be sent home or not. What will the government do about them,” said Tewari.

The party raised questions about the harvest season as the machines were stuck at the state borders. “How the government will let the people in villages to go to the field and to the Mandi”, asked Tewari.

It demanded that the government give free ration to everyone till September 2020, which was also a demand put forth by party’s interim president Sonia Gandhi

The Congress has also asked about the supply chains and check price rise, hoarding and black marketing.

The party has demanded that action should be taken against those employers who are using the occasion for retrenchment of employee.

Senior party leader P Chidambaram said, “But beyond the lockdown, what was ‘new’ in PM’s new year message? It is obvious that livelihood for the poor – their survival – is not among the priorities of the government,” Chidambaram tweeted.

“The poor have been left to fend for themselves for 21+19 days, including practically soliciting food. There is money, there is food, but the government will not release either money or food. Cry, my beloved country,” he said.

He also attacked the government for not listening to the economists at crucial times. “From “Raghuram Rajan to Jean Dreze, from Prabhat Patnaik to Abhijit Banerji, their advice has fallen on deaf ears.”

He said that the states are not getting their dues and the Chief Ministers’ demand for money has elicited no response. Not a rupee has been added to the miserly package of March 25, 2020.

Another senior Congress leader and former Union Minister Shashi Tharoor while welcoming the extension said that some relief for the needy was also required.

“I support Modi’s announcement on the lockdown extension. Can’t discard the gains being made. But he should have also announced serious relief for those who cannot make the ends meet. MGNREGA payments, Jan Dhan accounts, GST dues to states, and aid to sweeten the pill,” Tharoor tweeted.

On Tuesday, the total coronavirus cases in India rose to 10,363, with 339 deaths across the country.

Congress leaders Rahul and Priyanka Gandhi demanded the government scale up testing for coronavirus substantially, saying the country is testing only 149 persons per million.

“India delayed the purchase of testing kits & is now critically short of them,” Rahul Gandhi tweeted.

He said mass testing is the key to fighting the virus.

Party General Secretary Priyanka Gandhi, too, criticized the government for the low rate of testing, alleging that the reports of two persons came only after they had died.

“I have written to the UP Chief Minister to expand the testing facility,” Priyanka said.

The Congress has said that from February 1 till April 13, only 217,553 tests have been conducted, which means 3,021 tests per day and asked the government to enhance testing.

“Today, Wazeer e Azam has again ignored the plight of the vast majority of Indians who have been thrown into a state of hunger, homelessness and inconceivable desperation,” the Hyderabad MP tweeted reacting to Modi’s address to the nation on Tuesday.

He said the Prime Minister had left these people to the charity and goodwill of the rich. A lockdown without thinking about the hungry and deprived is cruelty of the highest form, he added.

DMK President M.K. Stalin wondered when Prime Minister Narendra Modi would answer the questions arising in people’s minds due to the nationwide lockdown.

According to him, the government should have announced its schemes to protect the people economically.

Stalin also said the central government decisions like centralised procurement of medical equipment, withdrawal of Members of Parliament Local Area Development Scheme funds and not giving money requested by the Tamil Nadu government are not in public interest.

Will decide in a day or two on migrant’s movement: Kejriwal