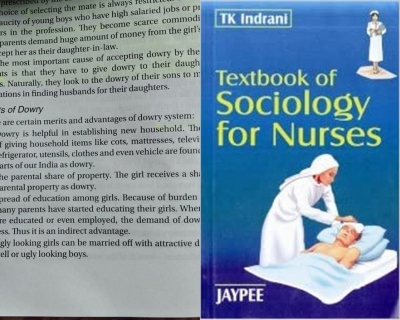 Mumbai, April 5 (IANS) In a major development, the publishers of a college sociology textbook – which dwelt on the “boons” of the dowry system – on Tuesday said they have decided to withdraw the book from the market with immediate effect.

“We would like to inform that we have taken immediate steps to withdraw the (text)book from the market. We take such matters with utmost seriousness and shall continue to strengthen internal processes to avoid such incidences in future,” Samina Khan, spokesperson for the New Delhi-based Jaypee Brothers Medical Publishers Pvt. Ltd, told IANS in an email.

Jaypee Brothers are “a responsible publisher” and serving the medical community for more than five decades, she stressed. However, details of how many copies will be withdrawn and how they will be replaced are not provided.

The step comes as a huge climbdown as the publishers had told IANS, which highlighted the issue on Monday – that they would not revise the title, but delete the offensive sections in future editions of the textbook.

The “Textbook of Sociology for Nurses”, penned by senior author T. K. Indrani propounded the theory that the much-abhorred system of dowry was actually good for society and argued that it helps parents of “ugly looking girls” to get them married off.

The “gems of social wisdom” are visible in its Chapter 6, Pg. 122, justifying how the main cause of accepting dowry by the groom’s parents is that they have to, in turn, give dowry to their daughters and sisters (outgoing).

“Naturally, they look to the (incoming) dowry of their sons to meet their obligations in finding husbands for their daughters,” it claimed.

The content sparked off a furore in various quarters besides a storm in the social media demanding stringent action against the author and the publishers from hawking such stuff.

Shiv Sena MP Priyanka Chaturvedi shot off a letter to Union Education Minister Dharmendra Pradhan to “immediately stop the circulation” of the textbook, prescribed for second year B.Sc. students in Maharashtra and other states, and take it off the curriculum.

“It is appalling how such derogatory and problematic text remains in circulation and that a textbook elaborates the merits of dowry. It actually exists in our curriculum and is a shame for the nation and constitution,” an aghast Chaturvedi said.

She also appealed to the Union Minister to chuck out the textbook off the academic curriculum as well as circulation and review all existing textbooks by a panel of experts.

The Indian Nursing Council (INC) also slammed the textbook for the “substandard, derogatory content” which is also against the prevailing laws of the land.

It made it clear that it only prescribed the syllabus for nursing programmes but did not endorse any author or publication, nor has allowed anybody to use its name for their publications.

Agitated academics in Mumbai like retired Prof. Mangal Gogte and former lecturer R. N. Desai had strongly castigated the textbook for “its poisonous ideas” and sought content quality checks plus prompt withdrawal of all copies from the Indian market.

The textbook also refers to how young boys earning high salaries or promising professional careers become “scarce commodities” and hence, their parents demand huge amounts of money from the girl’s parents to accept her as their daughter-in-law.

The author lists several “merits and advantages” of the dowry system, that is not only frowned upon and banned under the Indian laws, including “ugly-looking girls can be married off with attractive dowry with well or ugly-looking boys”.

Dowry helps (the young couple) in establishing their new household as the custom of giving things like cots, mattresses, television, fan, refrigerator, utensils, clothes and even vehicles are given by the girl to her husband in many parts of India, it said.

In the form of dowry, the girl automatically gets her share in the parental property at the time of her marriage, is another contention.

The dowry system helps spread education among girls as due to the burden of dowry, many people have started educating their girls, it said.

“When the girls are educated or even employed, the demand of dowry will be less. Thus, it is an indirect advantage,” says the textbook.

Incidentally, around 6 years ago, similar claims on the alleged ‘goodness of dowry’, featuring in HSC textbooks of Maharashtra had triggered a huge row. – IANS