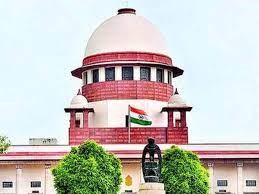 New Delhi:The Supreme Court on Monday said it could consider sending the application filed by Google back to the National Company Law Appellate Tribunal (NCLAT). The tech giant has moved the apex court seeking stay on a Competition Commission of India (CCI) order imposing a Rs 1,337 crore penalty on it.

During the hearing, a bench headed by Chief Justice D.Y. Chandrachud asked senior advocate Abhishek Manu Singhvi, Google’s counsel, “will Google practice the same regime in place in India as you have in Europe?”

The Chief Justice added, “Please reflect on this and come back.”

Singhvi said when the matter came before the judge he recorded that since there is a hearing in April, there is no need for an interim order. He added that Android is the world’s best ecosystem and these directions are extraordinary.

He said that directions were that my proprietary software which makes everything is to be shared and the second is side loading.

Singhvi added that the matter was filed in December and on January 3, it was mentioned before the NCLAT and the date of compliance is January 19.

The Chief Justice queried, “are the directions consistent with steps taken by you?” Singhvi said no.

The Chief Justice further queried, “are you then willing to put in place the regime that the EU has? You reflect on it.” The top court has scheduled the matter for further hearing on January 18.

The bench also added that it would send it back to NCLAT and ask them to deal with the application for stay.

On January 11, the Supreme Court agreed to examine an appeal by Google against a decision by the National Company Law Appellate Tribunal (NCLAT), declining to stay a Rs 1,337.76 crore penalty imposed on it by the Competition Commission of India (CCI) for alleged anti-competitive practices.

Google moved the apex court after the setback at NCLAT, which did not stay the CCI order on abuse of dominant position in multiple markets in the Android mobile device ecosystem case.

Earlier this month, the NCLAT did not find any urgency to pass an interim order, after noting that Google filed the appeal in December last year, though the CCI passed the order in October. It directed Google to deposit 10 per cent of the fine amount.

The tribunal had said that there was no urgency shown in the filing of the appeal, therefore Google could not be allowed to press for interim relief.

In October last year, the CCI had imposed a penalty of Rs 1,337.76 crore on the company for abusing its dominant position in multiple markets in relation to Android mobile devices.

The CCI also imposed a penalty of Rs 936.44 crore on the company for abusing its dominant position with respect to its Play Store policies.
IANS