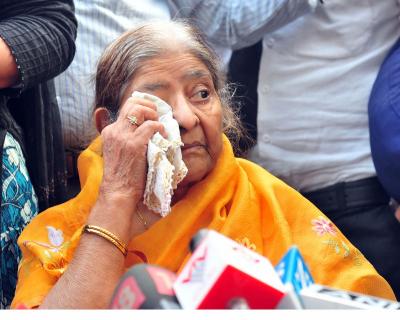 New Delhi: The Supreme Court on Friday dismissed the appeal filed by Zakia Jafri, wife of Congress leader Ehsan Jafri who was killed during the violence at Ahmedabad’s Gulberg Society in 2002, challenging the SIT’s clean chit to then Gujarat Chief Minister Narendra Modi and others during the riots in the state.

A bench, headed by Justice A.M. Khanwilkar said that intriguingly, the present proceedings have been pursued for last 16 years (from submission of complaint dated June 8, 2006 running into 67 pages and then by filing 514-page protest petition dated April 15, 2013) including with the audacity to question the integrity of every functionary involved in the process of exposing the devious stratagem adopted.

“To keep the pot boiling, obviously, for ulterior design. As a matter of fact, all those involved in such abuse of process, need to be in the dock and proceeded with in accordance with law,” said the bench, which also comprised Justices Dinesh Maheshwari and C.T. Ravikumar, in the 307-page judgement, besides 144-page annexure.

In 2006, Jafri filed a complaint seeking a probe into 30 points, which, she said, established the larger conspiracy related to the 2002 Gujarat riots, which left over 1,000 people dead. Senior advocate Kapil Sibal represented Jafri in the top court.

The bench said the court-appointed SIT in 2012, had formed its opinion after considering all the materials collated during the investigation and discarded larger criminal conspiracy allegations at the highest level for precipitating mass violence against the minority community in the state.

“Hence, the final report, as submitted by the SIT, ought to be accepted as it is, without doing anything more,” said the bench, adding that it does not countenance appellant’s submission regarding infraction of rule of law in the matter of investigation.

It said it found force in the argument of Solicitor General Tushar Mehta, representing the Gujarat government, that the testimony of then senior IPS officer Sanjiv Bhatt, former Home Minister Haren Pandya, and senior IPS officer R.B. Sreekumar was only to sensationalise and politicise the matters in issue, although, replete with falsehood.

“For, persons not privy to the stated meeting, where utterances were allegedly made by the then Chief Minister, falsely claimed themselves to be eye-witnesses and after thorough investigation by the SIT, it has become clear that their claim of being present in the meeting was itself false to their knowledge. On such false claims, the structure of larger criminal conspiracy at the highest level has been erected. The same stands collapsed like a house of cards, aftermath thorough investigation by the SIT,” it noted.

The top court appreciated the indefatigable work done by the team of SIT officials in the challenging circumstances they had to face. “At the end of the day, it appears to us that a coalesced effort of the disgruntled officials of the state of Gujarat, along with others, was to create sensation by making revelations which were false to their own knowledge. The falsity of their claims had been fully exposed by the SIT after a thorough investigation,” it said.

On December 12, 2013, the Ahmedabad’s magistrate court had accepted the SIT’s report and rejected a protest petition filed by Jafri on April 15, 2013. On October 5, the high court junked her criminal revision petition.

The top court said there is no material worth the name to even create a suspicion, indicative of the meeting of the minds of all concerned at some level; and in particular, the bureaucrats, politicians, public prosecutors, VHP, RSS, Bajrang Dal or the members of the state political establishment – for hatching a larger criminal conspiracy at the highest level to cause and precipitate mass violence against the minority community across the state during the relevant period. “Such conclusion reached by the Magistrate and the High Court is unexceptionable,” it said.

The top court said the SIT exposed the falsity of claims made by Bhatt and Pandya and also collated materials indicative of the amount of hard work and planning of the concerned state functionaries in their attempt to control the spontaneous evolving situation of mass violence across Gujarat.

The top court concluded: “After cogitating over the matter, we uphold the decision of the Magistrate in accepting the stated final report dated February 8, 2012 submitted by the SIT, as it is and rejecting the protest petition filed by the appellant… we hold that this appeal is devoid of merits and resultantly, deserves to be dismissed…” – IANS

Students in Bihar provoked through Whatsapp groups during Agnipath protest