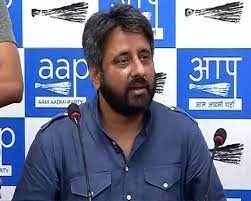 The Delhi High Court dismissed a plea moved by Aam Aadmi Party (AAP) legislator from Okhla Amanatullah Khan challenging opening of history sheet against him by Delhi Police declaring him as a bad character, according to Live Law.

Justice Sudhir Kumar Jain, however, said he will have the liberty to make a representation before the authorities concerned to remove the bad character tag, reported PTI.  The judge, while pronouncing the verdict, said the DCP concerned has given reasons in support of the action against the Delhi lawmaker as per law.

The Delhi Police had declared Khan, the AAP MLA, a bad character in March last year.

During the course of hearings, Advocate M Sufian Siddiqui appearing for Khan had submitted before the court that the act of Delhi Police of opening the history sheet was a brazen abuse of process of law. He contended the the authorities “acted in a malafide manner”.

“Instead of notifying the petitioner, they have circulated it in the media. It shows the mala fide conduct of Delhi Police. It vitiates the process including names of family members,” he had argued.

He claimed the replica of the history sheet, which is a confidential document, was shared on social media by a spokesperson for a rival political party to “malign” his image, the Live Law reported.

The Delhi Police had argued that due procedure was followed by the competent authorities to arrive at the decision. They contended “sufficient material” was not placed before the court to prove malafide on their part.

Police said applicable rules were duly followed by the authorities and the decision was arrived at given the material on record and after application of mind.

The proposal for declaring Khan a bad character was sent on March 28 by the Jamia Nagar police station in the Southeast district and approved on March 30.

A total of 18 FIRs have been registered against Khan, the document stated.

According to police, a person who is involved in multiple criminal cases, including murder and attempt to murder, and can disturb peace in an area, can be designated a bad character.