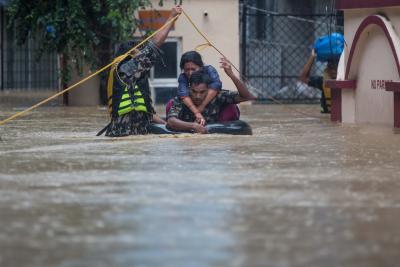 Kathmandu: Floods and landslides have wreaked havoc in Nepal following the incessant rains on Tuesday and Wednesday, leaving scores dead and missing.

More than 50 people are missing in a massive flood in Sindhupalchowk district which is located some 70 kilometers north from Capital, Kathmandu that has caused a huge loss of life and property.

Chief District Officer of Sindhupalchowk district, Arun Pokharel said that seven people have died in the floods induced by incessant rains in Helambu rural municipality and six of them were workers in a local fish farm.

Health Minister Sher Bahadur Tamang, who is elected to the House of Representatives (HoR) from Sindhupalchowk itself, has informed that over 50 people have gone missing and security agencies have started search and rescue operations in the district.

The local Sindhupalchowk administration has not yet pinpointed the exact figure of the missing and has said that the details are being collected.

Floods in Melamchi and Indrawati rivers have wreaked havoc in the Sindhupalchowk district triggering landslides, sweeping out the human settlements and sweeping away the bridges and other development infrastructure.

A rescue team of Nepal Army (NA) and police has reached the flood-hit Melamchi area of Sindhupalchowk in a helicopter.

There are reports that floods and landslides have damaged some villages, highways and some projects where dozens of families are displaced.

Several districts of the country are facing difficult situations due to floods and landslides and the government has decided to mobilise all the government agencies to cope up with the ongoing and looming disaster.

A meeting at Nepal’s Home Ministry on Wednesday afternoon decided to speed up search and rescue operations in flood and landslides hit area, effectively carry out rescue and relief operations by mobilizing all the state machinery.

Chief of National Disaster Risk Reduction and Management Authority (NDRRMA) Anil Pokharel said the meeting endorsed the work-plan to be executed in the period of 100 days from the day the monsoon started.

Several rivers in Nepal are flowing above the danger level due to torrential rain and the government has urged the people to shift to safe places.IANS