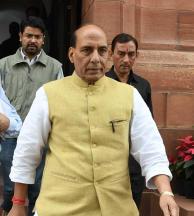 Guwahati: The Assam unit of the BJP has appealed to Union Home Minister Rajnath Singh to extend by one month the time fixed for filing objections to the published draft of the National Register of Citizens (NRC).

The draft excluded 40,07,707 applicants’ names due to some discrepancies.

“We believe that not a single foreigner’s name should be included in the final NRC.

“At the same time, names of not a single genuine Indian citizen should be excluded from the final NRC.

“The figure of 40,07,707 is a huge one and hence we believe that there should be more time given to file claims and objections so that all genuine cases are included in the document,” said BJP Vice President (Assam unit) Majoj Ram Phukan.

A memorandum has been sent to Rajnath Singh in this regard.

Phukan also said that the draft NRC included names of some declared foreigners and appealed to the Home Minister to take appropriate action so that those could be corrected in the final NRC.
(IANS)

Thiruvananthapuram: The Kerala Police have registered an FIR on the Vizhinjam clashes and the Archbishop of the Latin Catholic Diocese, Thomas J. Netto has been named as the first accused. More...