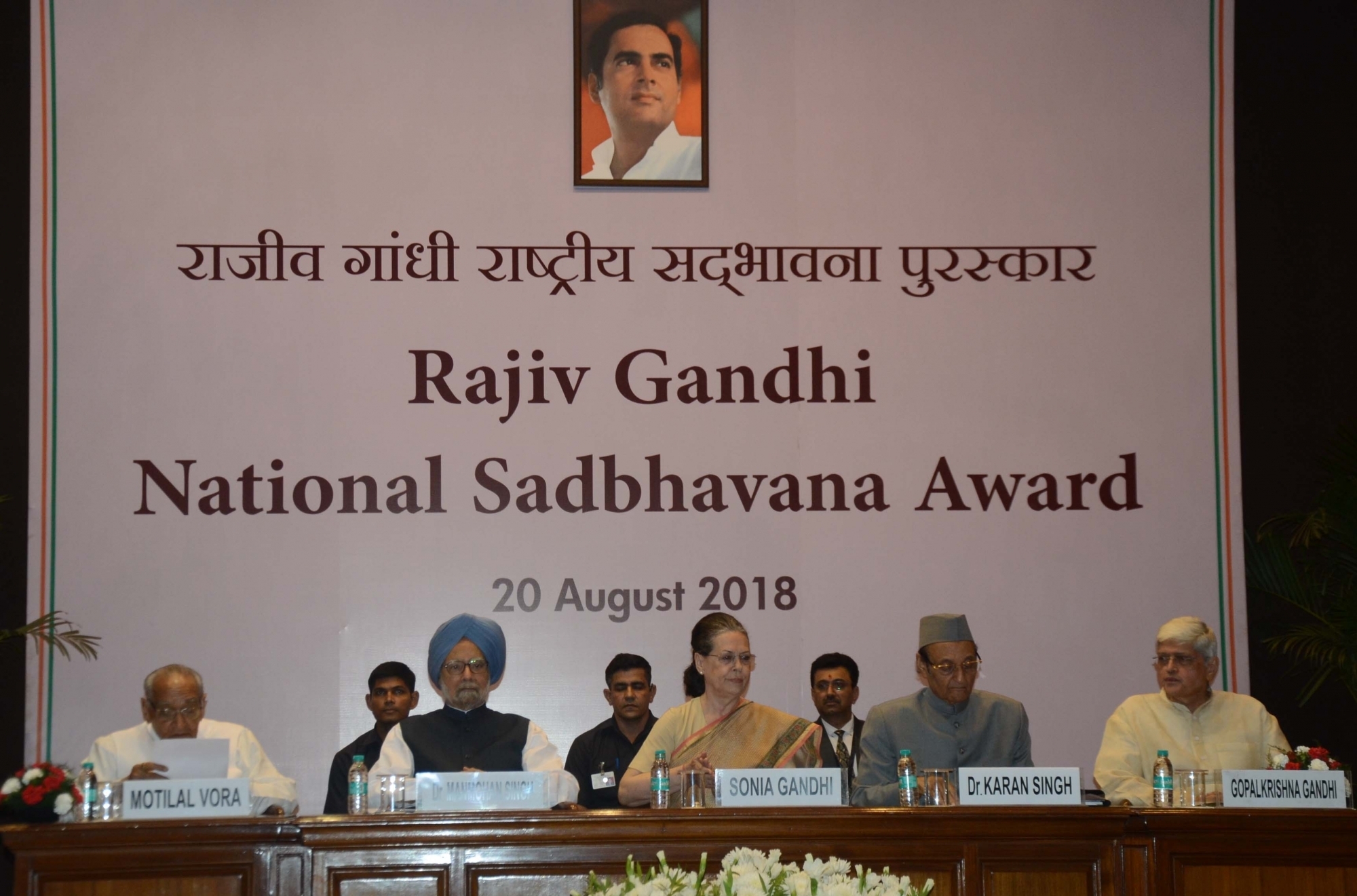 New Delhi: Former Prime Minister Manmohan Singh on Monday took a veiled dig at the Modi government, saying that some “disturbing trends” witnessed in India over the past few years and perpetrated by certain groups can only hurt national interests.

Speaking at a function where the ‘Rajiv Gandhi Sadbhavna Award’ was conferred on former West Bengal Governor Gopalkrishna Gandhi, the senior Congress leader emphasised the need to arrest the trends that are “anathema to the promotion of peace, national integration and communal harmony”.

United Progressive Alliance Chairperson Sonia Gandhi also indirectly attacked the Modi government, saying that the ideologies that reject the “composite essence of our nationhood” must be opposed and there was a need to fight the forces of divisiveness, hate and bigotry.

Manmohan Singh said: “… some disturbing trend that our country has been witnessing over the past few years call for solemn reflection. These unsavoury trends of growing intolerance, communal polarisation, growing violent crime propelled by a hatred of certain groups and of mobs taking the law in their own hands can only harm national interests.

“They are anathema to the promotion of peace, national integration and communal harmony, which are the cherished objectives enshrined in our magnificent Constitution. All of us perhaps need to pause and reflect on how we can go together and contribute to arresting these trends.”

The former Prime Minister praised Gopalkrishna Gandhi for speaking on these issues with “great courage and conviction” and for “holding up a mirror to our people at large”.

Sonia Gandhi condemned the divisive forces and vowed to take them on collectively. She also hailed the former West Bengal Governor, a grandson of Mahatma Gandhi, for being an “uncompromising champion of constitutional values”.

“He is one of the most eloquent and uncompromising champions of the values enshrined in our Constitution, values that are under determined and systematic assault.

“There is much pain and anguish in what he has been writing in recent years and every right-thinking and right-acting Indian shares not only his analysis of what is going wrong but also his profoundly sensitive articulation of what needs to be done.

“We collectively express our resolve to oppose the ideologies that reject the composite essence of our nationhood and to fight the forces of divisiveness, hate and bigotry,” the Congress leader said.
(IANS)

Thiruvananthapuram: The Kerala Police have registered an FIR on the Vizhinjam clashes and the Archbishop of the Latin Catholic Diocese, Thomas J. Netto has been named as the first accused. More...