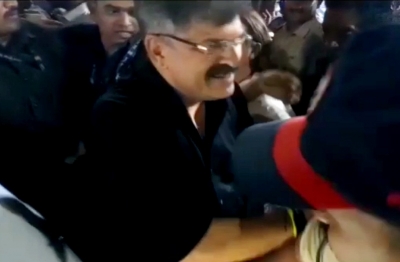 The Mumbra Police in Thane had lodged a first information report against Awhad late on Sunday (November 13) based on a complaint filed by BJPMM vice-president Rida A. Rashid alleging molestation.

“I am not at all pleased with all this. The police should have viewed the videos of the incident before taking any cognisance of such a complaint. It is a systematic effort to finish me off politically with such low-level tactics,” said Awhad.

He also claimed that the police were ‘under pressure’ from above to frame him in a false case but he was a fighter and would not be cowed down by such machinations.

Soon after the case was filed on Monday, Awhad had threatened to resign as a MLA in protest against what he termed as ‘murder of democracy’ in Maharashtra, and later said he would abide by NCP President Sharad Pawar’s decision, even as top party leaders appealed not to take such a step.

This is the second case filed within 72 hours against the outspoken Awhad who is a vocal critic of the ruling Balasahebanchi Shiv Sena Chief Minister Eknath Shinde.

Previously, he and 11 others were booked for creating a ruckus in a mall multiplex during the screening of a Marathi film, ‘Har Har Mahaev’ on November 7 but was granted bail by a Thane Court on Saturday.