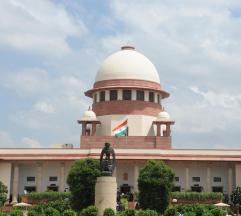 New Delhi: Expressing concern over sexual abuse of minor girls at shelter homes in Uttar Pradesh and Bihar, the Supreme Court on Friday sought a report from the Centre on utilisation of funds meant for childcare institutes.

A bench headed by Justice Madan B. Lokur asked the Ministry of Women and Child Development to furnish details on education, health and nutrition facilities for children lodged in such institutes.

The bench directed the Centre to also place before it the data received from the states on how the funds were utilised, how performance audits were done and details on the management information system (MIS).

Advocate Aparna Bhat, the amicus curiae in the matter, contended that the MIS was supposed to be developed wherein complete data of children along with facilities provided at these institutes was required to be updated but details have not been filed by the government.

The court is hearing a PIL filed on the basis of a 2007 newspaper report on sexual abuse of children in orphanages and childcare institutes. It posted the matter for further hearing on August 21.

During Friday’s hearing, the apex court expressed concern over cases of sexual abuse of minor girls and young women in Bihar and Uttar Pradesh and asked “how will this stop?”
(IANS)

The Delhi Police on Friday inducted an all-woman Special Weapons and Tactics (SWAT) team, consisting of 36 commandos — the first-ever by any police force in India — for anti-terrorist operations.