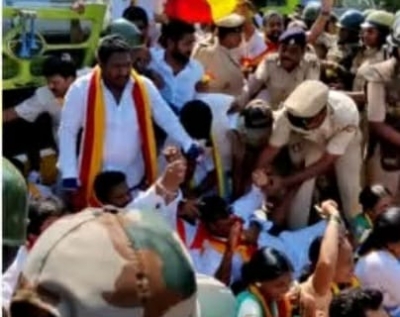 Bengaluru: The protests by Kannada activists around the issue of border row between Maharashtra and Karnataka took a violent turn on Tuesday after trucks bearing Maharashtra registration number plates were attacked by an angry mob.

The Karnataka police took president of Karnataka Rakshana Vedike, Narayana Gowda, and hundreds of workers into custody following the violence.

According to the police, the activists who had arrived from various districts across the state had hurled stones at five trucks moving towards Maharashtra.

They climbed on to the trucks and shouted slogans against Maharashtra politicians. They also plucked out the registration plates and painted the vehicles black.

The protesters climbed on police vehicles with Kannada flags and raised slogans.

The activists have planned a big procession and rally in Belagavi city and also wanted to prevent the entry of Maharashtra ministers.

As Maharashtra ministers called off their visit, the police in Karnataka, prevented the Kannada activists from entering Belagavi city to maintain law and order.

Belagavi city has a large number of Marathi speaking population.

Narayana Gowda, meanwhile, said: “This is not a one-day agitation. The government is using the police force to nip our struggle. We will teach a lesson to the government. We will discuss laying siege to the Suvarana Vidhana Soudha, when the winter session will be held.”

BJP general secretary and legislator C.T. Ravi said Maharashtra will not get an inch of land from Karnataka.