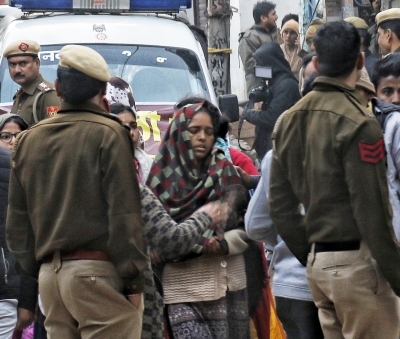 New Delhi, Jan 3 (IANS) Are the Delhi Police running away from questions in the Kanjhawala case, in which a 20-year-old woman died a painful death after being dragged by a car for about 12 km in the early hours of Sunday?

A Delhi Police officer on Tuesday spoke for just 1.33 minutes while giving details of the investigation into case.

Addressing a press conference, Sagar Preet Hooda, Special Commissioner of Police (law and order), said that one more woman was with the victim at the time of the incident.

“She had suffered no injuries and went back to her home after the incident. Now we have an eyewitness and her statement is being recorded. This makes our case strong and we will complete the investigation very soon,” said Hooda.

However, he did not take any questions from the media, leaving several queries unanswered.

* After the victim’s Scooty was hit by the car, how did the woman get stuck under the car?

* Where were the police patrolling units of the area even as the woman was dragged for up to 12 km? Was there no police presence in that stretch despite the deployment of more than 16,000 police personnel across the city on December 31 night till January 1 morning?

* How is it possible that those sitting inside the car did not feel that something got stuck under the car?

* Why did the accused drove on a selected route for nearly an hour with the body still stuck under the car?

* Exactly at what time did the accident occur and for how long was the victim dragged by the Maruti Baleno car?

The incident has once again raised the issue of women’s safety in the national capital.

Five occupants of the car, suspected to be under the influence of alcohol, have been arrested in connection with case after being booked under Sections 304-A (causing death by negligence) and 279 (rash driving) of the Indian Penal Code. Later, following protest by the victim’s family members, the police added IPC Sections 304 (culpable homicide not amounting to murder) and 120-B (criminal conspiracy) to the FIR.

The blood samples of the five accused have been sent to the Forensic Science Laboratory to test if they were under the influence of alcohol. The report is yet to come.

Police have, as per the initial post-mortem report, ruled out sexual assault of the victim. However, the ‘final opinion’ will come after the receipt of a chemical analysis report of the biological samples which have been preserved.

A source said that a full report will be submitted to the Union Home Ministry along with an inquiry report, which is being prepared by the Special Commissioner of Police, Shalini Singh, on Wednesday. – IANS